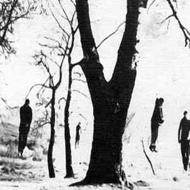 I'll put Northeast Ohio's heavy music collective against any region in the world when it comes to churning out raggedy hate metal and sludge punishment that is from the heart and convincingly soul-burning. It is a fact of which England's Retribute Records is keenly aware, making it no surprise that the label signed a band made up of members of the mighty FISTULA, HEMDALE, and DIE HARD (pre-INTEGRITY). That band is ACCEPT DEATH and the self-titled album is one nasty sludge album that chills to the bone and brings to the surface feelings of malice and vengeance that were banished to the deepest recesses of the mind years earlier

Forget about likening ACCEPT DEATH to everyone from EYEHATEGOD to IRON MONKEY (even though it would not be inaccurate). What is important is to understand that the kind of subsonic bass rumble and down-tuned-to-Hell guitar tone is as evil as you will ever hear. Check out the MP3 on the Retribute site and listen to just how malicious a guitar can sound when put into the right hands. The vocals of guitarist/bassist Matt J. Rositano are of two kinds: (1) snarling, frighteningly vitriolic and somewhat similar to FISTULA, and (2) growling and beastly. It is a combination that is expertly utilized throughout the album. The tempos often crawl across the floor, but are somehow never boring. The trio does not stick solely to one tempo though. Speedy sections are present on songs such as "Normal" and "Tolerance". In both cases, the shift into high gear will instill paralyzing fear into those not expecting it. And speaking of fear, there is a multi-track guitar, uh, "harmony" on "Punish the Retarded" that is just plain disconcerting; the nefarious and dissonant noises heard are 100 miles from pleasant.

Folks, the hate rising from ACCEPT DEATH like an acrid smoke is as real as it gets. It cannot be faked. Yeah, it's a sludge album and will not make anyone forget the progenitors of the style, but it is a damn good representation of the form. What else would you expect from those sick Ohio bastards?