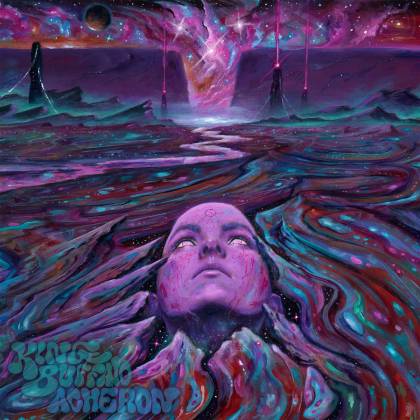 At the risk of stating the obvious, if you enjoy getting high and listening to riffs, KING BUFFALO are almost certainly one of your favorite bands already. A band that combine and encapsulate everything that people love about several connected subgenres, joining the dots between stoner rock, doom and mind-expanding psychedelic explorations, the Rochester, New York trio are the only credible heirs to MONSTER MAGNET's turbo-psych crown. And you might even argue that KING BUFFALO transport the listener even further out into space-rock orbit than their New Jersey forebears. Frankly, you should be sufficiently stoned when listening to "Acheron" that none of this really matters. Arriving a mere few months after the stunning "The Burden of Restlessness", the band's fourth full-length album showcases the ongoing evolution of their sound via some of their most freewheeling and immersive material yet.

Quite how three people make this much noise is open to debate, but there must be some kind of paranormal channeling going on here. Four songs deep, each one a towering, hypnotic epic, and as sonically vast as a clear night sky, "Acheron" takes the quasi-motorik principles of previous records and allows those ideas to take flight. The opening title track is so epic and grandiloquent that it would seem horribly reductive to tar it with the stoner rock brush. Instead, this is boss-level psychedelic rock; kaleidoscopic in hue and cinematic in scope, it's a widescreen take on the desert rock formula, with the entire universe as a dazzling, sanity-threatening backdrop. Constructed around a single propulsive riff, it's also a master class in minimalism. "Zephyr" is even more blatant about its debt to the cyclical pulse of Krautrock, as KING BUFFALO drift off into some shimmering celestial nirvana, born aloft by waves of twinkling ambience and the tantalizing promise of its inevitable, riff-driven crescendo.

Another slow-burning magic carpet ride, "Shadows", is so spacious and serene that it feels more like dubbed-out doom than anything more conventional, with frontman Sean McVay blissed-out, disembodied vocal floating through the fog toward a proggy synth payoff to cherish. The closing "Cerberus" is the darkest song here by far: gnarly and dissonant, it nods respectfully towards VOIVOD's world of warped sci-fi, but with a fluid underlying groove that expands, contracts and then spirals off into the stratosphere with a dash of bluesy flamboyance.

I may have said this before, but if you enjoy getting high and listening to riffs, KING BUFFALO are almost certainly one of your favorite bands already. If not, listen to this and lose your mind.