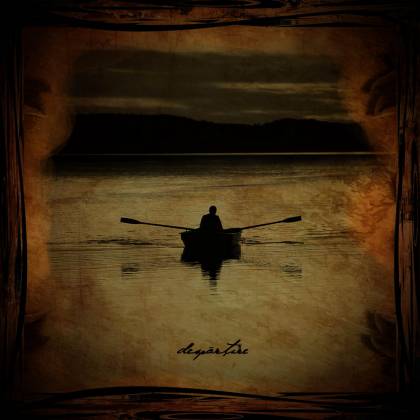 It always seems a terrible shame that atmospheric / melodic doom metal (and its slower, scarier cousin funeral doom) is fated to be a solely underground concern. As CLOUDS prove yet again on "Despărțire", this is music that conveys universal emotions, with a grandeur and grace that set it apart from much of the metal scene's frantic, furrowed-brow clatter. The Romanian band's sixth album (and second in 18 months) is easily their most accessible yet, too: a beautiful but devastating monolith to melancholy, it gently builds on the increasingly soulful and adventurous strains of last year's "Durere" and throws in some remarkable guest appearances along the way.

Obvious gods like SWALLOW THE SUN, SHAPE OF DESPAIR and SKEPTICISM aside, virtually no one has produced as much great music in this genre as CLOUDS have since forming less than a decade ago. "Despărțire" never strays too far from a plainly effective blueprint, but this band have gained so much confidence over the years that these songs simply feel more rounded and complete than their predecessors. The opening "Deepen This Wound" is majestic and stately, awash with treacly reverb and ghostly ambience, as multi-instrumentalist Daniel Neagoe kindly demonstrates the effortless restraint of his clean vocals and the abyssal power of his growls. Similarly, "Your Name In My Flesh" revels in dynamic possibilities; the glacial drift of its heavy parts contrasting beautifully with dreamlike moments of respite and the ephemeral keening of haunted violins.

Should you judge a band by their collaborators, a roof-raising turn from ANTIMATTER's Mick Moss on "This Heart, A Coffin" and a majestic vocal and voiceover from MY DYING BRIDE's Aaron Stainthorpe on "In Both Our Worlds The Pain is Real" both make perfect sense, as these kindred spirits forge a new bond at an excruciating snail's pace, amid billowing clouds of otherworldliness. Far less disorientating but equally gripping is "The Door We Never Opened", which begins as an ambling, lovelorn eulogy, shrouded in frosty echo, before blossoming into a mid-paced powerhouse with a magnificently stirring and stellar Neagoe vocal. Another variation on the same immaculate theme, "A Place For All Your Tears" gives the Finnish doom contingent a run for their funereal money. Most beautiful of all, "See The Sky With Blind Eyes" is almost ANATHEMA-like in its melodic poetry and slow-build charisma, a suitably refined and emotionally ruinous conclusion to an album with remarkable depth and endless class. Such sweet sorrow: irresistible.