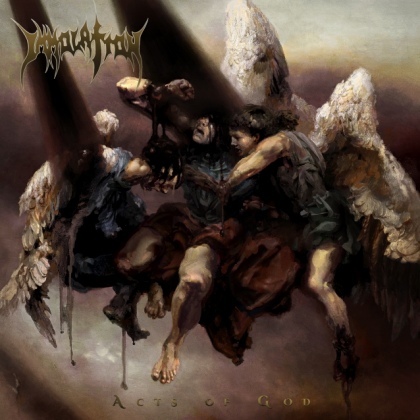 Five years have passed since IMMOLATION's last album, "Atonement". In its 30-plus years of existence, the unit hasn't released a single subpar offering, although naturally some stand out above others. Their earliest releases, veritable classics like "Dawn of Possession" (1991) and "Here in After" (1996),are revered higher than most of what's followed, but they've always been consistent and more than just a little good with their bleak, dark, anti-religious metal. The legendary, New York-based death metal machine finally returns with its 11th full-length album, "Acts of God", their best effort since 2002's "Unholy Cult".

Robert Vigna and Ross Dolan have been hacking away with their stringed axes in IMMOLATION since the eighties, and the longstanding core has included drummer Steve Shalaty for almost 20 years. Even guitarist Alex Bouks, returning for his second release, has been a friend and colleague of the band for decades. The seasoned marriage of personalities and musicians lends itself to a chemistry and musical interplay that's incredibly cohesive and natural. The veterans' technical know-how and intricate compositions are paradoxically channeled into the straightforward, digestible song flow here.

Album number 11 is IMMOLATION's longest release, clocking in slightly over 52 minutes. And yet the songs sound more succinct and to the point than ever by virtue of the band's experience, and concise songwriting. Following a brief, tone-setting intro, "An Act of God" hits the eardrums with skull-crushing subtlety. There's a desirable familiarity from start to finish, as IMMOLATION has always abided by an "if it ain't broke, don't fix it" mentality. But there's always been incremental growth and development as the years have passed. "The Age of No Light", for instance, includes a riff that's vaguely reminiscent of Middle Eastern music, and the song proceeds with the act's characteristic melodic melancholy evoking feelings that most death metal bands aren't even remotely capable of touching.

Longtime producer Paul Orofino helmed the album studio-wise, contributing to "Acts of God" sounding like it was created in a jam room filled with passionate and primal energy amongst longtime cohorts. "Shed the Light" generally rests upon a foundation of blast-beat belligerence, dramatically breaking back and forth with a variation and morphing of a slow, groove-based riff that provides contrast and helps tie the song together. Depth and dynamics are inextricably linked to everything that IMMOLATION is. Elsewhere, songs like "Overtures of the Wicked" strike savagely with merciless aggression.

There is simply so much going on within "Acts of God" that numerous listening sessions are required to even begin to have a grasp of all that the album has to offer. The release isn't likely to gain the status of some of the band's earliest albums in the long run, but it truly is one of their best. In any event, it's hard to imagine that anyone could make the case that this isn't one of the esteemed band's best albums of the latter half of its career. Simply put, IMMOLATION is one of the best death metal bands of all time, and "Acts of God" proves that they continue to be one of the genre's leaders.