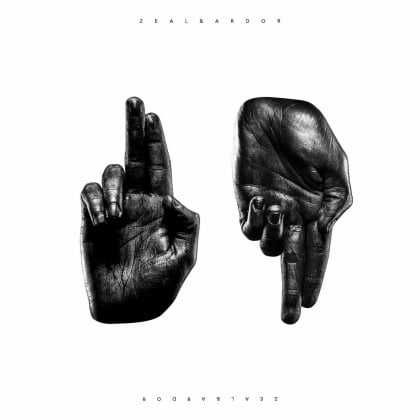 Regularly tipped as heavy music's next big thing, ZEAL & ARDOR mastermind Manuel Gagneux may be beginning to wonder what more he has to do to bewitch bigger audiences. After two widely acclaimed albums, his band are still being touted as the next big thing, and even if you came to this new record cold, without ever having heard ZEAL & ARDOR before, there is a solid chance that you would come to the same conclusion. Marking a small but significant evolutionary step for its creator(s),"Zeal & Ardor" offers an upgraded version of all that went before and the most strident and convincing expression of Gagneux's vision yet.

The subversive shades of soul, blues and gospel music that made 2016's "Devil Is Fine" such a striking debut are present and correct, along with the startling brutality of the band's heaviest moments, wherein Gagneux morphs from sun-blasted balladeer to slavering caco-daemon with eerie finesse. As ever, what could easily have been a mess of disparate elements seems to fit together perfectly, aided greatly by the clever way that Gagneux blends studio trickery with the fiery dynamics of a real band. If it didn't all sound so instinctive and natural, you might suspect cynical motives. As it is, "Zeal & Ardor" is utterly believable.

Still firmly committed to the filthiest and most distorted of low-end tones, ZEAL & ARDOR begin album number three with a two-minute, eponymous overture hewn from thudding, industrial grind and heat-haze atmospherics. It's a stunning starting point, and one more than backed up by "Run", a thrillingly untamed encapsulation of the ZEAL & ARDOR effect, wherein tribal drums and scything, blackened riffs duke it out with a blizzard of vexed electronics. Anthemic and cheerfully blasphemous, "Death To The Holy" whips swamp blues, horror movie keys and at least three massive riffs together, with Gagneux leading a furious call-and-response over machine-gun kicks and shadowy synths.

It may be telling that ZEAL & ARDOR, have produced some of their most willfully extreme and eccentric material here. "Emersion" brings sugary, futuristic electronica and hammer-attack blasting together in a swirling eddy of post-rock fury; "Erase" is an imperious, electro-metal march with haunted campfire trimmings; "Feed The Machine" begins in stomping spiritual mode, before mutating into an evil, neck-wrecking tech-thrash mantra. But it's the most streamlined and slick encapsulations of Gagneux's musical plan that hit the hardest. Whether it's the scream-along blues-metal of "Church Burns", the pitch-black groove metal assault of "Götterdämmerung" or the unholy spaghetti western shtick of "Golden Liar", ZEAL & ARDOR's unique journey through the dark is still electrifying.