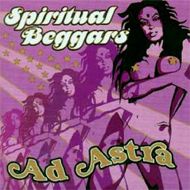 Led by former CARCASS / current ARCH ENEMY six-stringer Mike Amott, Sweden's SPIRITUAL BEGGARS have been making critically-acclaimed, SABBATH-inspired "stoner rock" albums for about half a decade so far, and their songwriting skills are rapidly improving with each successive release, as clearly evidenced by their third—and finest—full-length CD to date. Much to the band's credit, SPIRITUAL BEGGARS have not altered their style or attempted to deviate from the tried-and-tested formula in order to attain greater commercial success. Instead, they have focused all their efforts on tightening up their songwriting and perfecting their execution, which is virtually flawless, as the band deliver 12 songs of crushingly heavy, riff-laden metal that is as catchy as it is powerful.

As before, SPIRITUAL BEGGARS appear to be unconcerned with the prospect of breaking new musical ground, and there is admittedly very little on Ad Astra that has not been done before in one form or another by countless other similar sounding acts. However, where this trio clearly excel is the quality of their songwriting, and you'd be hard-pressed to find another band in this genre of music delivering material as strong as "Angel of Betrayal" or opener "Left Brain Ambassadors".

Featuring excellent production courtesy of Fredrik Nordstrom, Ad Astra is a must-have for fans of old SABBATH fans as well as for anyone with an appreciation for thick, guitar-heavy music done with a decidedly retro feel.