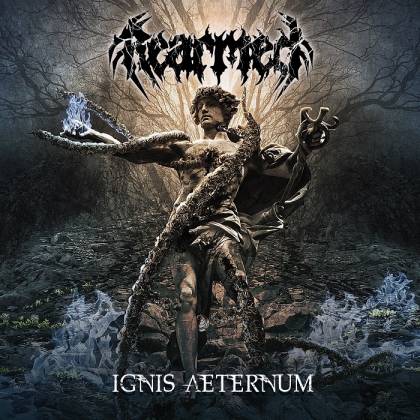 Timing is everything in the world of metal. If RE-ARMED had released their blistering 2012 debut "Worldwide Hypnotize" a decade earlier, the Finns would surely have been propelled to the front of a then flourishing melodic death metal scene. These days, melo-death is more of a fringe concern and, despite occasional masterworks from the likes of OMNIUM GATHERUM and SOILWORK, rarely throws up anything as exciting as those early IN FLAMES and DARK TRANQUILLITY classics. But even though it's unlikely to kick-start another surge of popularity for this sound, "Aeternum Ignis" is a glowing example of how satisfying and exhilarating melo-death can be when it's done with passion, precision and great songwriting.

Opener "Dive Within" established a breathless pace at first strike, produced to a futuristic sheen but still showing rough edges and a hint of thuggish fury. "Beyond The Horizon" is a gloriously over-the-top melo-death epic, with a soaring, melodic chorus hook and numerous flashes of prog metal intricacy. "Ode to Life" is simply an instant anthem: pure neck-wrecking modern-metal gold, with surging symphonic textures and fluttering electronics creating a melodramatic backdrop. "Eager to Collapse" flits from gothic grandeur to all-out power metal pummel, climaxing with a deathly sprint to the finish, while the anthemic "Resistance" is a blackened cyber-goth beat 'em up, vocalist Jouni Matilainen spitting fire over an absurdly gripping stream of riffs.

The album's second half follows the same pattern, never dipping in quality and delivering large amounts of manna from melodic death metal heaven. Both "The Hollow Light" and "Voyager" dare to reach beyond genre rudiments to a more cinematic, gently progressive take on their creators' formula. Meanwhile, the closing "Built to Last" welds weeping, sugary guitar melodies with some truly vicious, full-pelt thrashing, as strings burst through cracks in the barrage. The whole thing becomes more and more unhinged as it careers to a breathless but ultimately elegant conclusion, as RE-ARMED revel in their artful reimagining of such classic ingredients. Most importantly, the Finns have given melodic death metal a long overdue kick up the backside here: if you thought that simply didn't make 'em like this anymore, "Aeternum Ignis" has other ideas.