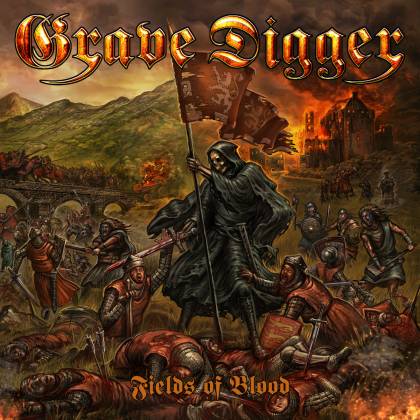 Four decades, countless tours and several metric hell-tons of thunderous music later, GRAVE DIGGER are still an unquestionable benchmark for German heavy metal. There has always been something gloriously pure and unpretentious about the Gladbeck veterans, their dogged persistence is arguably as integral to their appeal as the songs themselves. But as much as diehard metalheads will always applaud resilience and longevity, GRAVE DIGGER would never have survived without frequent creative sparks to keep things exciting for musicians and listeners alike. It is unlikely to surprise any devoted fans that "Fields of Blood" is an undeniable return to top form. Herein the Germans return to the battlefields of Scotland, reviving that always slightly odd but clearly genuine obsession with Scottish history that informed 1996's "Tunes of War" and 2010's "The Clans Will Rise Again": two very obvious high points in their extensive catalogue. Not that there was anything particularly wrong with 2018's "The Living Dead" or the preceding year's "Healed by Metal" — a painfully misjudged novelty song or two aside — but the bagpipes ringing out at the beginning of "The Clansman's Journey" should have fans of red-blooded traditional metal salivating, because GRAVE DIGGER never sound more intense or bombastic than when they're plundering the past.

Opener "All for the Kingdom" smartly encapsulates the Germans' appeal. Brutal guitar tones and ominous muscularity underpin everything they do here, and even when the first of numerous rousing, choral refrains erupts, that heaviness is never abandoned. Chris Boltendahl's unique, tremulous gargle remains a brilliant narrative focal point, and he too seems to be reinvigorated here, spitting out his lyrics with real venom, audibly buoyed by the Celtic clangor unfolding around him. Axel "Ironfinger" Ritt (guitar) has seldom delivered a more convincing or creative overall performance, either. Echoing the windswept grandeur of "The Clans Will Rise Again" (Ritt's first album with the band) while nudging GRAVE DIGGER's sound into both heavier and more elegant territory ("Thousand Tears", most notably, is a superbly eerie gothic ballad),he is long overdue more acclaim as one of European metal's chief defenders of the faith.

Meanwhile, if you're familiar with GRAVE DIGGER's past works, "Fields of Blood" is simply a top-drawer example of what they've been doing since 1980. From full-bore singalongs like "Lions of the Sea" and "Union of the Crown" to more epic, atmospheric and adventurous fare like "The Heart of Scotland" and the ten-minute title track, it's an immersive musical adventure that rowdily celebrates heavy metal's ageless might, but with broadswords, kilts and bagpipes thrown in for grand, dramatic effect. If you've never heard the band before, "Fields of Blood" is an excellent entry point. They do heavy metal properly in Germany, you know.