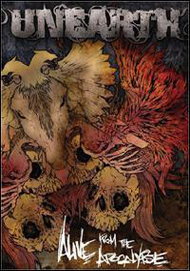 Alive from the Apocalypse

Now damnit, this is what a music DVD should be all about! I've not even thought about UNEARTH for several months, although I've always found them to be a great metal band that makes great metal albums and puts on fantastic live shows. "Alive from the Apocalypse" features a ferocious performance from the band in Pomona, California (Disc 1) and an excellent documentary, plus bonus material (Disc 2).

Disc 1 ("Live from Pomona, CA") is one of the best DVD live performances I've seen in quite a while. It is rare that a DVD truly captures the essence of a band, but this one absolutely nails it. UNEARTH have always prided themselves on being a live act, as far back as their formation in 1998 and you can witness them on top of their game during this 11-song set. Culling material from all three albums (two from full-length debut "The Stings of Conscience", including encore "One Step Away"),the band's new school melodic death/thrash with a ‘core twist went over a storm. The roar of vocalist Trevor Phipps could be heard on the Atlantic coast, his patterns, lines, pitch, and interaction with the audience — including time spent in the crowd during "The Great Dividers" — simply perfect. Then again, every member was on his game, as usual, and the sound mix is superb. Of course, the highlight is always watching guitarists Buz McGrath and Ken Susi go ape shit, flying all over the stage, generally wreaking havoc, and not missing a note doing it. Susi in particular is a fucking maniac.

The song selection is strong and while selections like "Giles" and the crushing "This Glorious Nightmare" from "III: In the Eyes of Fire" are great, it is the material from sophomore effort "The Oncoming Storm" that really light the place up. "Zombie Autopilot" — in my opinion one of the band's shining moments — comes off superbly in a live environment; the guitar harmony on that tune makes the hairs on the back of my neck stand straight up every single time. Even the little things to which some bands give short shrift are delivered impeccably, such as Susi's clean vocal part on "Endless". This one is worth watching over and over again. The only thing that keeps the DVD from being a perfect 10 is that between-song banter, etc is edited out (rather than capturing the performance front to back with no interruption),and that's a very minor bitch.

As for Disc 2, the documentary is informative, entertaining, and funny as hell. I can't ever remember laughing this much through a metal DVD. At well over an hour, the story of the band's rise from humble hardcore beginnings to international metal super stars is told by the band members themselves, Mike Faley and Brian Slagel of Metal Blade, and a who's who of the metal community. Everyone from Vinnie Paul (PANTERA, DAMAGEPLAN) to Dino Cazares (DIVINE HERESY, ex-FEAR FACTORY) to Adam D (KILLSWITCH ENGAGE) and many, many more assist in telling the story and singing UNEARTH's praises. The profiles on each member are especially well done; featuring many moments that will have you cracking up. The tours, the record deals, the trials and tribulations, and the precipitous rise of the act are all here. It's obvious that a great deal of work went into the editing of this piece, as it is one of the best jobs I've ever seen on DVD. The bonus live performances and music videos are included and continue the emphasis on making a quality product, and believe me, "Alive from the Apocalypse" is one hell of a quality product. Excuse me while I dig out my copy of "The Oncoming Storm" and commence to shake plaster off the ceiling.