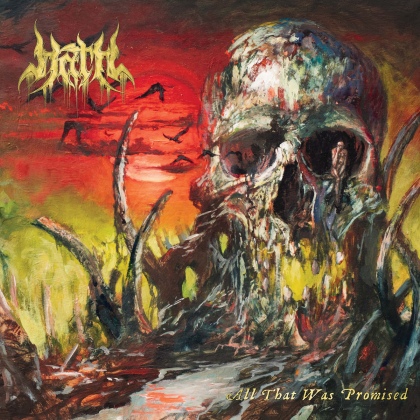 All That Was Promised

Although located squarely (and proudly) at the dark and progressive end of the death metal world, HATH have clearly been in a state of evolution since releasing their 2019 debut, "Of Rot and Ruin". Just as it probably should be, "All That Was Promised" is rooted in the stormy clangor of NOVEMBERS DOOM and EDGE OF SANITY, but this New Jersey quartet also have a malevolent, blackened and subversive streak a mile wide. It's that tension, between dark-hued, proggy opulence and white-knuckle nihilism, that makes this such a consistently gripping listen. That, and the fact that these songs kick an absurd amount of ass.

Opener "The Million Violations" is a pitiless starting point, with blastbeats cascading down in waves and not a chink of sonic light to be found. "Kenosis" doubles down on that murderous approach, with sinister melodies and BEHEMOTH-like vocal crescendos seeping out from the violent melee, while "Lithopaedic" marries the grotesque pomp of mid '90s MORBID ANGEL to the maxed-out battery of blackened death metal at its most myopically brutal.

More overtly progressive but no less punishing, "Iosis" does bewitching things with the simplest of dissonant riffs and a heavyweight waltz-time rhythm; "Death Complex" employs some neat post-metal, syncopated churn in its bid to flatten all-comers, amidst waves of mean-spirited riffs. HATH play it like they mean it, and even the most straightforward songs here — "Kenosis" and the title track spring to mind — seem driven by something more than just great musicianship and a desire to crush skulls. The closing "Name Them Yet Build No Monument" is the finest of the lot, and truly brings this band's progressive instincts to the surface. Still resolutely dark as hell, but imbued with elegance and refined dynamics, it begins as a ruthless extreme metal onslaught but evolves into something far more interesting; a delicate, climactic instrumental coda providing the album's only real moment of light or hope.

"All That Was Promised" is also smart and shrewd enough to never quite fit into any particular subgenre pigeonhole. HATH are audibly sworn to the black and hell-bent on annihilation, but there is great creativity and verve on offer here too.