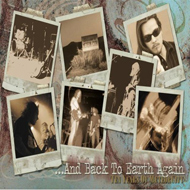 …And Back to Earth Again...

For the track listing, go to this location.

I cannot think of any circumstance in which I would have guessed that I'd be giving a compilation album a perfect score. There are some great collections out there, but one always seems to find a reason, no matter how small, to take the rating down at least a notch. Then again, I never thought I'd come across a compilation as compelling and genre defining as "…And Back to Earth Again: Ten Years of MeteorCity". I'm hesitant to even call it a compilation album, as this three-disc, 45-track juggernaut is far more than a mere collection of songs; it is a journey deep into the heart of the stoner rock genre from a beloved label that always delivered the goods. In fact, "stoner rock" doesn't really capture the essence of this music. I rather prefer co-founder Aaron Emmel's description of the music that makes up the MeteorCity catalog as "heavy, spacious, melodic rock", as noted in the comprehensive story of MeteorCity told in the extensive liner notes. Indeed, this is music that shakes the earth with hard rock fundamentals, passionate performances that emanate from the soul, splashes of the psychedelic, and the heavy blues foundation that is often found in this style of music.

The story of Emmel's and Shickler's coming together to form a label consisting of the kind of music, much of it KYUSS-inspired, the pair wanted to hear has been told and re-told, so I'll spare you the rehash of it here. Once again, what matters is the music. The true test of an album's worth is its ability to captivate the listener with every spin (in this case, all three discs back to back to back) with nary a dud. That "…And Back to Earth Again: Ten Years of MeteorCity" has that ability as a compilation album with a variety of bands from both sides of the Atlantic somehow plays as one long masterpiece with a seamless flow is nothing short of spectacular.

Much is made of the album consisting of the founders' choice cuts, not necessarily the "hits, but when one truly thinks about it, the bands found here always made albums, not just song collections. As such, the quality would be high no matter the individual track selection. A perfect case in point, New Jersey's SOLACE, in this writer's opinion one of the best heavy metal bands the world has ever known, could have had just about any three songs featured here. That "Whistle Pig", "Man Dog" (both from "Further") and "Once Around the Sun" (from my personal favorite "13") were chosen matters little, as pretty much any three would have done the band justice. You also get multiple selections from criminally underrated Swedish band BLIND DOG, a group that offers a quintessential mix of blazing hard rock, 70s psychedelic touches, and a kind of raggedy soul that together makes for one hell of a moving listen. Shickler's very own band SPIRITU is included, as are heavyweights like ABDULLAH, THE ATOMIC BITCHWAX, and NEBULA… Christ, it is overwhelming to even begin to think about the number of quality acts on this release. Even a song that seems so different from the rest, "Reaching Out" by ORQUESTA DEL DESIERTO, fits so snugly for its acoustic, desert rock jam quotient.

Those that want a little more from their compilations will be pleased with the long-out-of-print LOWRIDER ("Lameneshma", "Shivaree", and "Upon the Dune"),SIXTY WATT SHAMAN ("Red Colony),and 7ZUMA7 ("Shotgun") songs that were remastered for the album. For whatever reason, the only songs on the collection that weren't remastered are TRUCKFIGHTERS' "In Search of (the)" and THE ATOMIC BITCHWAX's "STD". I ARE DROID's "Serenade" and SLAPROCKET's "The Seed" and "Beggars Grinning" were previously unreleased. Though not an exclusive track, the cover of IRON MAIDEN's "Murders in the Rue Morgue" by COSMOSQUAD is absolutely delightful.

So there you have it, 10 years of phenomenal hard rock and metal from a label (now absorbed by StonerRock.com) that will be sorely missed packed onto three discs with exquisite packaging. This is the definitive statement. Buy it and explore the world that Aaron and Jadd so graciously offered to us in 1998 with "Welcome to MeteorCity". Here is to the generation of new fans that are sure to be transformed by the power of "…And Back to Earth Again: Ten Years of MeteorCity".