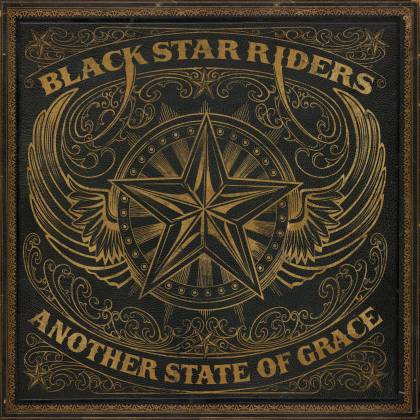 Another State Of Grace

It can't be easy being BLACK STAR RIDERS. On the one hand, most sane people were delighted when an acceptable incarnation of THIN LIZZY mutated into its own entity and started to make records that complemented, rather than added to, the legacy of guitarist Scott Gorham's legendary former band. On the other, the task of persuading people that the band can stand apart from the LIZZY catalogue and still rally the troops was never going to be an easy one. That this multinational crew have reached their fourth album with credibility and momentum intact speaks volumes about the spirit behind the whole thing. The joy of this ongoing collaboration has long been how natural, unpretentious and honest it all sounds, and "Another State Of Grace" could hardly be any more at ease with its place in the world.

As much as opening track "Tonight The Moonlight Let Me Down" confirms that this is business as usual for Ricky Warwick and his veteran comrades, there is definitely a grittiness and rugged swagger to the sound of "Another State Of Grace" that instantly makes it more engaging than its predecessors. Warwick is still doing the world's best Phil Lynott impression, of course (and no, he didn't sound like that when he was fronting THE ALMIGHTY),but he delivers every line with such conviction and gruff charm that it's hard not to wonder exactly what anyone could complain about. In the absence of the real THIN LIZZY, for reasons that should be abundantly clear, this is still as close as we're going to get. The even better news is that the majority of these songs are good enough to take the weight. "Ain't The End Of The World" is a balls-out rocker, Gorham's euphoric presence underpinning Warwick's fiery vocal; "Underneath The Afterglow" is darker and gnarlier, metallic shades adding muscle to a blissfully restrained melody; "Soldier In The Ghetto" is lithe power-pop, with rippling Hammonds and a dash of HELLACOPTERS bite; "Standing In The Line Of Fire" is another high-energy rocker, with a wonderfully louche solo from Gorham; "What Will It Take?" is all breezy, TOM PETTY vibes and BYRDS jangle, this band's self-evident chemistry coalescing around some wholesome country rock clatter.

The only real misfire is "Why Do You Love Your Guns?", an undeniably well-intentioned exercise in misty-eyed handwringing about how "love is the only thing in this world." It's a fair point to make, of course, and BLACK STAR RIDERS won't be the first or last band to write a song inspired by America's mass shooting epidemic, but it's a perfunctory, mawkish ballad and a disappointing mid-album sag.

Closing with the driving, gutter metal snarl of "In The Shadow Of The War Machine" and the roots rock strut of "Poisoned Heart", the RIDERS' fourth trip down the rock 'n' roll highway is easily their best yet. We might all secretly want them to keep playing tons of THIN LIZZY songs live, but their own material has more than enough charm, class and power of its own.