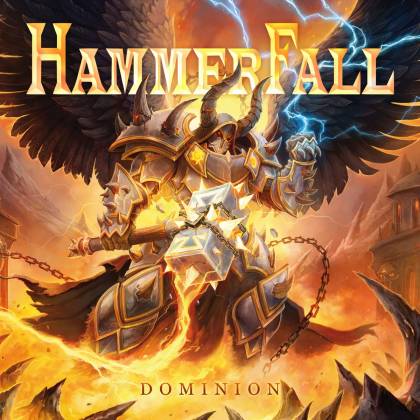 The problem with consistency and steady momentum is that it becomes increasingly hard to impress. HAMMERFALL have been admirably reliable over the years, releasing a steady stream of albums – ten in total, prior to "Dominion" – that have always hit the mark, delivered the goods and provided the Swedes with a new anthem or two to add to the live show. But you know what they say about familiarity, and it's been a longtime since HAMMERFALL have released an album that has generated more than a few approving noises from the fans and middling-to-good reviews from the likes of me.

Well, it has to be said that picking "Dominion" as a title is a good start: it sounds authoritative, imperious even, with a dash of menace thrown in. HAMMERFALL have never been convincing advocates for the dark side, but neither have they been guilty of the twinkly eyed banality of much 21st century power metal. Happily, this record seems to mark a wholehearted return to the spirit of the band's self-evident musical roots in the classics of the '70s and the '80s. From the showily bombastic rush of opener "Never Forgive, Never Forget" onwards, "Dominion" is a pure heavy metal record, unapologetic in its classicism but grittier and more insistent than anything the Swedes have released since the 2002's immortal "Crimson Thunder". Joacim Cans sounds incredible here, whether powering his way through the rampaging "Scars of a Generation" or ensuring that grown men cry in response to mellifluous power ballad "Second to One". To be fair, Cans sounded great on all the other HAMMERFALL albums too, but there is something about these songs that seems to have lifted him to a new level of brilliance. Similarly, Oscar Dronjak's gift for churning out riffs that sound like they must have been on some classic early '80s metal album, but definitely weren't, has never been more potent. Whether it's the symphonic crunch of the title track, the steady chuggin' stomp of "Dead by Dawn" (sadly, not a DEICIDE cover) or the eat-cheese-and-be-damned euphoria of "(We Make) Sweden Rock", these songs feel crafted, robust and convincing. In fact, they're built to last in a way that the songs on 2016's "Built to Last" weren't. Which is mildly amusing.

As if to emphasize the idea that "Dominion" has far more in common with, say, JUDAS PRIEST's immaculate "Firepower" album from last year than with any fluffy power metal band you might mention, "Battleworn" feels like a vigorous reclaiming of the sound that HAMMERFALL helped to nurture in the '90s. "Chain Of Command" repeats the trick, but with a dash of ACCEPT-like thuggishness, while the closing "And Yet I Smile" is like some trippy outtake from MAIDEN's "Piece Of Mind". Not since those heady days of "Glory to the Brave" and "Renegade" have the Swedes sounded so in love with their original blueprint. It matters not whether that has merely coincided with the surge of creativity that led to the best songs the band have written in a long time or if Dronjak's crew have simply decided that it's time to remind everybody who's boss: as its title suggests, "Dominion" rules and it's good to hear the hammer fall with such force again.