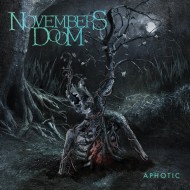 The definition of a "class act", Chicago's NOVEMBERS DOOM hit stride with "The Pale Haunt Departure" and continued rolling right on through "Into Night's Requiem Infernal", picking up a more aggressive streak to go with their melancholic death 'n doom. Always concerned first with ensuring that each track is crafted for lasting impact and that nary a note is wasted, on "Aphotic" the approach has resulted in the most captivating, well rounded, and lyrically penetrating album of NOVEMBERS DOOM's career.

It's not so much that NOVEMBERS DOOM brings anything groundbreaking in creating its compelling compositions. Rather, it is the skill with which the band takes various elements of the familiar and weaves them into a style all its own. On "Aphotic" that meticulous method has resulted in a bountiful harvest of the beautiful and beastly. As is often the "formula" for success on a band's pinnacle release, "Aphotic" sees NOVEMBERS DOOM playing to its strengths by mixing those elements in ways complementary and effectively contrasting. The death metal aggression is immediate, the melancholia is at once serene and soul crushing, and the compositional approach as a whole is dynamic, even epic, yet never verbose. The booklet and artwork, as usual, is very well assembled and integral to the effort.

Indeed, everything works together to form not a collection of songs, but an emotional journey of ebbs and flows. And you just don't pick a song and press play; you buckle up, start at the first track and take the entire trip each and every time. On opener "The Dark Host" Rachel Barton Pine's violin strikes a sorrowful tone as the song soon builds to a vintage NOVEMBERS DOOM up-tempo melo-death slam, reprieves granted only for KATATONIA-esque sadness. It is on "Harvest Scythe", perhaps the most quintessential NOVEMBERS DOOM to date, on which the balancing act reaches new heights and achieves perfection in its main melody; it is one of many tracks proving the album to be the eve versatile Paul Kuhr's greatest vocal achievement. Both "Buried" and "Six Sides" feature moments where Kuhr's delivery generally reminds of NEVERMORE's Warrel Dane at his most emotional (circa "Dead Heart in a Dead World"). The big guy's performance on the former at once chills to the bone and shocks with its intense rage, as lines like "I will make you pray for your death" and "rope around my neck…just one push from the edge of life" might suggest.

Yet there is so much more on this rapturous musical journey into the darkest depths of the psyche and the molten center of the soul. Included is a heartfelt acoustic gem called "What Could have Been", featuring the gentle guest vocals of Anneke Van Giersbergen (THE GATHERING). Part 1 ("A Violent Day") and Part 2 ("A Day of Joy") of "Of Age and Origin" showcases NOVEMBERS DOOM's mastery of nuance and subtle atmospherics, assisted by Ben Johnson's light keyboard lines and the guest vocals of Dan Swanö, who also mixed and mastered "Aphotic". The album closes in equally epic form with "Shadow Play", a track that builds and builds until a "Children of the Grave" style pattern erupts into a giant's stomp that shakes the earth. Failure to mention that "Aphotic" is enhanced to monumental proportions by the power and intricacy of guitarists Larry Roberts and Vito Marchese, drummer Sasha Horn, and bassist Mike Feldman would be nothing short of criminal.

It would be a bastardization of truth to say that NOVEMBERS DOOM has ever gotten it wrong. Accuracy would however reign supreme in recognizing that Chi-Town's finest never got it this right. NOVEMBERS DOOM kills it on "Aphotic".