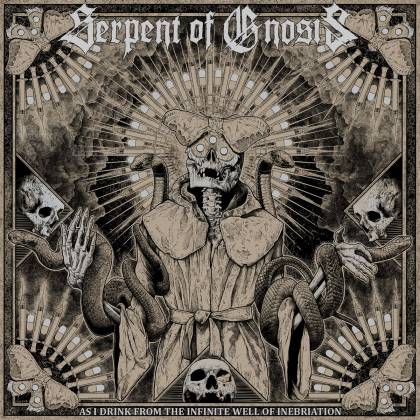 As I Drink From The Infinite Well Of Inebriation

Metal's road to glory is littered with the broken corpses of bands that never quite received the recognition or success that they deserved. Uncharitably viewed with suspicion by underground diehards, JOB FOR A COWBOY never quite shook off their early reputation as a MySpace deathcore band. Smart folk know that by the time vocalist Jonny Davy's crew released their final album, 2014's "Sun Eater ", they had evolved into one of the most inventive and eccentric death metal bands around. All of which should mean that plenty of astute metalheads will want to check out SERPENT OF GNOSIS. Comprising three quarters of the "Sun Eater" line-up — with JOB FOR A COWBOY guitarists Al Glassman and Tony Sannicandro, alongside Max Lavelle (BLACK DAHLIA MURDER) on bass and Darren Cesca (DEEDS OF FLESH) on drums — this feels very much like a firm press of the reset button for all concerned. It's also one of the most vicious metal records of the year so far. In reality, this began as Cesca and Glassman's project. With Lavelle, they had all been members of brutal sickos GORATORY (who could forget 2002's delightful "Orgasm Induced Diarrhea" album?),which probably explains why "As I Drink From The Infinite Well Of Inebriation" is one of the most vicious record of the year so far.

If you want a bold and dogmatic opening statement, "Decoherence" does the job magnificently. Barely 90 seconds of furious, angular deathgrind, it has far more in common with PIG DESTROYER or IMPLORE than with the ornate technicality of later JOB FOR A COWBOY releases. And perhaps that is the point here: both in lyrical terms (as the record's title suggests, Davy is exploring his battles with addiction here),and via sonic and songwriting values that can only be described as seriously fucking direct. "As I Drink From The Infinite Well Of Inebriation" is a ferociously focused declaration of intent, stripped of all artifice and indulgence and delivered at full, bug-eyed pelt. "Paroxysmal Dance" adds brief bursts of mid-pace to the attack, but SERPENT OF GNOSIS only have eyes for the jugular, as blasts, hyper-speed D-beats and SLAYER-ized lead squeals drive everything to a seething, edge-of-chaos climax, a few seconds shy of the two-minute mark. "Fragile Vessel of Serenity" has more than a little DEAD CROSS-style insanity pulsing through its veins, with multiple twists and jarring dead stops and a hair-raising vocal from Davy, who sounds — and not for the first time, it's worth noting — genuinely deranged. A warped, darkly ambient outro only adds to the sense of bruising catharsis. "The Colorless Capsules" is another blizzard of top-speed riffing and lurching, hellish grooves, with just a dash of nihilistic hardcore hurled in for good measure.

Perhaps the only evidence that SERPENT OF GNOSIS may evolve into something more complex in the future is the four-minute "Cognitivity", which amounts to the album's dramatic centerpiece: slow and sludgy, with Davy in full psycho preacher mode, it gives "As I Drink..." a welcome sense of emotional depth. "A Mask of Lucidity" erupts seconds later; another short, sharp jab to the gut, but laced with woozy atmospherics. The remaining four tracks cover similar ground, but in a variety of twisted ways. The tooth-spitting madness of the closing "Lurid Skin" standing out as the best of the bunch.

Fans of these musicians' previous efforts will be all over this like a dose of leprosy, but regardless of your subgenre affiliations or prejudices, SERPENT OF GNOSIS are making the kind of angry, urgent noise that makes this ridiculous world a little easier to tolerate.