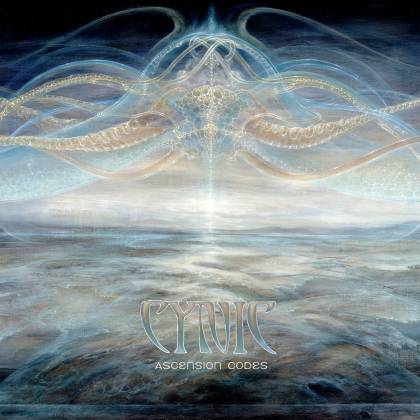 The events that have occurred between the release of 2014's "Kindly Bent to Free Us" and CYNIC's 2021's album, "Ascension Codes", could warrant a several-hundred-page band biography without regard for the band's prior history. The acrimonious split in 2015 between founding members Paul Masvidal (vocals/guitars) and Sean Reinert (drums/keyboards),the eventual agreement in 2017 that allowed Masvidal to continue with the CYNIC name, and the tragic deaths in 2020 of both Reinert and longtime CYNIC bassist Sean Malone are each monumental events spectrally lurking over this new album. "Ascension Codes" is the culmination of recording that Masvidal has worked on with new drummer Matt Lynch — making his studio debut after joining the band as touring drummer in 2017 — and keyboardist Dave Mackay, who also provides synthesized bass lines. The trio as individuals are each more than the up to the task of providing individual standout moments of musicianship. The end result of "Ascension Codes" though is an effort that does not quite add up to the sum of its parts.

Masvidal's approach to guitars and vocals remains an immersive experience of progressive metal atmosphere. Lynch shows incredibly frenetic dexterity behind the drum kit, and his work on this record holds up to the heavy scrutiny that it will likely receive from longtime fans. Mackay generates some very catchy basslines that occasionally do some heavy lifting on the album's more hypnotic moments, though some may not be able to help but wonder how much more pronounced those contributions would have sounded performed with the power of an actual bass guitar. Ultimately though, these elements do not end up coalescing into truly satisfying start-to-finish listening experiences for most of the record. "The Winged Ones", the first proper song on the record, ends up being an excellent showcase for Lynch to establish his bona fides early on, but is overall a meandering instrumental track that feels like it just ends abruptly without reaching a cathartic climax.

This continues to be the trend for the majority of "Ascension Codes". Even as the trio ventures into more adventurous territory, such as the more overtly ominous opening of "Mythical Serpents" and the weaving of neo-classical guitar and electronica passages on "Aurora", the general feel on most tracks is that of a disjointed workshop record as opposed to a set of fully realized, cohesive songs. This feeling of momentum starting and stopping is also added to by numerous interlude tracks throughout the record, referred to in publicity materials as "codes." These brief 30-second passages of ambient music and vocals end up doing more to detract from the album instead of enhancing it, and at times do not come off as clean lead-ins or lead-outs from the songs that they surround.

There are a few moments during the second half of the record where the strong musicianship and ambitious ideas do come together to show promise of potential future greatness from this lineup. "In A Multiverse Where Atoms Sing" is a tightly packed four-minutes of infectiously dazzling guitar work and drumming that alternate between brief flashes of pummeling and jazzy flourishes, all of it bolstered by an uplifting aura of melodic triumph. "Architects of Consciousness" is a track where the opening minutes are another great showcase for Lynch and Mackay, with Masvidal joining in with a combination of crunchy rhythm riffs and fusion guitar solos to power the song into another display that shows promise for the future.

There is no doubting the pure musical talent of the musicians that Masvidal has recruited to join him in continuing the CYNIC name. The elements for truly great new music to be released are there, but the puzzle pieces don't complete the picture just yet on "Ascension Codes".