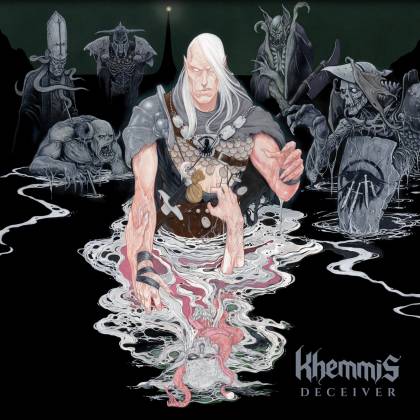 Since their 2015 debut, "Absolution", KHEMMIS's approach to their brand of melodic doom has been a winning formula. The group has mastered the art of weaving in powerful riffs that straight-up rock amid more forlorn moments of doom metal. The interplay between guitarist Phil Pendergast's clean vocals and the more guttural growls of fellow guitarist Ben Hutcherson is an expert class in organic escalation, as the changes in mood are always timed in a sensible and seemingly organic manner that remains palatable without coming off as forced. "Deceiver" is the latest display of the band's mastery, and while the formula remains mostly unchanged from where the band has gone so far, Pendergast and Hutcherson's guitar work fuels the band's most fiery work yet.

The group's ever-growing ability to deliver a forceful metallic pummeling is evident very shortly into opener "Avernal Gate". The album's opening track begins with a haunting acoustic intro, which quickly launches into a fast-paced display of melo-death fury. The midtempo crunch and Pendergast's soaring melodic vocals have become trademarks of the KHEMMIS sound and do end up powering most of the track. Once Pendergast lowers his vocal registers into a goth-rock lull, the band's death metal influences propel the finish with shredding guitars and a flourish of Hutcherson's death growls, all augmented by Zach Coleman's full-scale outpouring of thunderous drumming.

Even as the group enters more depressive waters on "House of Cadmus" and delivers a mosh-worthy trudge during the first half of "Living Pyre", KHEMMIS manages to squeeze in enough rocking moments to keep the record from drowning in potentially overwrought emotion. The second half of "Living Pyre" is a powerful march of harmonized guitars with Hutcherson providing escalating fierce growls, leading into the album's most brooding track, "Shroud of Lethe". The guitar work that opens that track provides a haunting vibe similar to METALLICA's "Fade to Black". And much like that vaunted classic, this track builds to a steady metallic gallop in the back half that is bolstered by an enticing bit of sludge-guitar, which briefly gives off a New Orleans-vibe to these Denverites.

KHEMMIS keeps the proceedings on "Deceiver" tight and compact with its six tracks and 41-minute running time. The band reasserts its position as quality purveyors of melodic doom metal with the first five tracks. It's "The Astral Road", the rousing finale that puts this record in the contention for 2021's year-end lists. After a subdued minute-long intro, KHEMMIS launches into an exhilarating whirlwind of arena-worthy trad-metal greatness, making a bid for audiences that love throwing their fist in the air and pumping along with shout-along choruses, triumphant guitar work, and hearty drum fills. Even as the track eventually slows down for its finishing stretch, it remains quite the exclamation point to end the listening experience on.

KHEMMIS very quickly found their footing and established their formula early on. "Deceiver" is a confident display of a band where any minor adjustments they may make are purposely plotted to enhance what is already working very well.