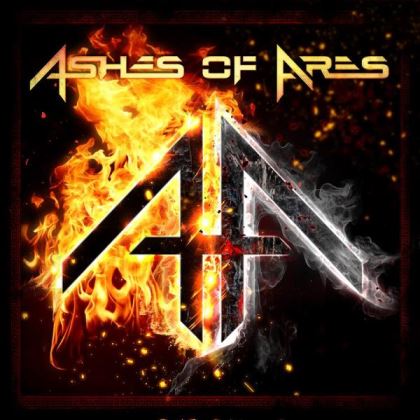 So good to see Matt Barlow back in the saddle. Having once bowed out of metal for a spell while answering a higher calling in law enforcement, the ex-ICED EARTH vocalist starts over from scratch with his own entity, ASHES OF ARES. Founded alongside estranged ICED EARTH bassist Freddie Vidales and former NEVERMORE drummer Van Williams, ASHES OF ARES is going to be considered a summation of its parts by default.

It's a pretty fair correlation (more so to ICED EARTH than NEVERMORE),since Barlow is well-set within a power metal construct gained from his time spent in ICED EARTH and PYRAMAZE. Look into Barlow's departure after his second tenure with ICED EARTH (which harvested a captivating performance on "The Crucible of Man: Something Wicked Part 2") as you will. Brothers-in-law Jon Schaffer and Matt Barlow made oodles of magic together and by attrition, ASHES OF ARES does echo portions of their creative zeniths.

ASHES OF ARES is a modest though composite power metal concourse for Matt Barlow to heap stacks of his sundry ranges as a personal showcase. The man could rightly earn Metal Vocalist of the Year merits if the right powers take proper notice. Each song on ASHES OF ARES' self-titled debut features two-to-three overdubbed sets of vocal tracks ranging between tenor and countertenor, even deep bass in spots, such as the intro lines on the QUEENSRŸCHE-esque "The Messenger". At times, Barlow's raucous shrieks manifest behind his gruff fronts (i..e "Move the Chains", "What I Am", "Chalice of Man" and "On Warrior's Wings"),but the prevailing distinctions he exudes on this album is hunger and stateliness.

Everything Matt Barlow pours into ASHES OF ARES is full of conviction and his trajectories are frequently steeped with expressive bloodletting. "This is My Hell", "On Warrior's Wings" and the quixotic ballad "The Answer" (powerful in both the electric and acoustic versions) give Barlow the opportunity to bare his private wounds with emotional ranges striking at all pitch levels. Barlow even drops some of his best Paul Stanley impressions (long a subversive part of his repertoire) as one of a few different tones blended with superb cadence on "The Answer". Having it reprised and stripped to a splintered poignancy on the acoustic version reveals even profounder soul.

"This is My Hell" and "The Answer" outclass everything else on this album, even though the remainder is structurally potent. Freddie Vidales doubles as bassist and guitarist in ASHES OF ARES, and he's given supplementary boosts along the way from guests such as MALEVOLENT CREATION guitarist Gio Geraca (who has now joined ASHES OF ARES' touring ensemble along with former INTO ETERNITY bassist Dean Sternberg) on "Chalice of Man". Then ex-NEVERMORE shredder Jeff Loomis strips the walls on his solo for "Punishment". Most of Vidales' riff patterns are chunky yet rhythmic, and having to play a dual role as part of ASHES OF ARES' rhythm section on top of lead guitarist was probably no mean feat to accomplish. However, Vidales proves himself up to the task, using as an example, the languishing harmony of "This is My Hell", which assumes a meatier tone after he sets the song up with an extensive acoustic melody.

Vidales' gusting riffs huffed out of the initial slow measures of "On Warrior's Wings" sets up for a faster interlude, while the thrashy openings to "Chalice of Man" and "What I Am" may scale back in tempo as they progress, but neither let off the intensity. If there are any real contenders ASHES OF ARES has to measure up against the pounding gusto of ICED EARTH, it's these cuts, along with "Move the Chains".

While there are a few tempo hiccups and occasional thinness in some of the instrumental portions of the album's mix, what's terrific about ASHES OF ARES (aside from Matt Barlow himself) is that it honors its predecessors from ICED EARTH right on down the genre timeline to ARMORED SAINT. Matt Barlow may be the star attraction here, but ASHES OF ARES is stocked with metal purists whose mutual goal is to give their audience nothing less than the best of themselves.