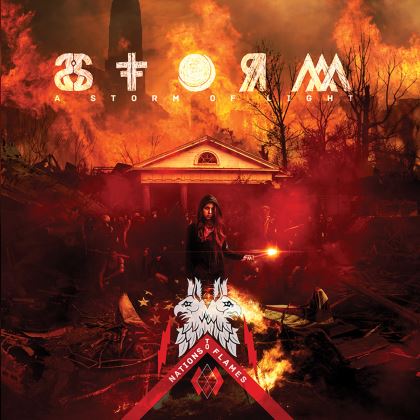 A STORM OF LIGHT

Former RED SPAROWES/BATTLE OF MICE guitarist and NEUROSIS visual artist Josh Graham clearly has a vision, broad in perspective as it may be. In the past few years, he's married his stark film visuals to his own interpretation of post metal and crunk, which has often created bleak and daunting compositions in A STORM OF LIGHT.

This time, Graham, along with his cohorts, bassist Domenic Seita and drummer Billy Graves, take a few steps out of their comfort zone, if that's what previous ASOL recordings are thought to be. Upping the ante are guest appearances from SOUNDGARDEN's Kim Thayil and INDIAN's Will Lindsay on a handful of tracks. "Nations to Flames" is still temperamental and often engaged upon a doom plot (i.e. "The Fire Sermon" and "You Are the Hunted"),yet there's a lot more embracing of the agitated industrial elements Graham was hinting at on earlier ASOL albums. This mingling of moods pays off huge on "Nations to Flames".

"Omen" chugs on some fang-laden riffage (aided by Thayil and Lindsay) and rolling tribal rhythms from Billy Graves in the vein of MINISTRY and KILLING JOKE, all stacked with looped soundbytes, filtered vocals and escalating chaos. Preceding "Omen" is the bass-driven march of "Apostles of Hatred", where fusillades of high-pitched guitar lines ring of cataclysm overtop the crunchy tempos fluctuating between skulking and teeming. In the midst of "Apostles of Hatred" comes an accelerating apex before dropping the song back into a sequence of industrial-strangled modes that are equally climactic.

Graves sieves out a different tribal roll out of the distorted bass plugs from Domenic Seita on "Dead Flags", upon which Josh Graham churns a lace of curving riffs. Likewise in a KILLING JOKE and MINISTRY mind frame, "Dead Flags" soon scales back a click into a checked down groove containing scores of fills, filters and voiceovers nattering behind Graham's hypnotic leads. Both of the aforementioned muses can be flagged once again in the quick and careening "Disintegrate", one of the faster songs yet brought to life in this band. Billy Graves is a monster here with his woven interchanges and walloping rolls, while Josh Graham and Will Lindsay whirl a grand, echoing deluge in the final third of the song.

Even when diced in slower measures on "The Fire Sermon", "All the Shining Lies" and "The Year is One", A STORM OF LIGHT is compelling, largely because of the scorching layers and gnarling overdubs added to the measured sonic abuse. The peak of "All the Shining Lies" is fretful and puncturing yet so bloody brilliant. The wailing guitar lines cresting throughout "Lifeless" are deeply affecting as is the oppressive crush of the song that bears the most resemblance to NEUROSIS than anything else on this album. The spooky instrumental "Soothsayer" sets up the crawling and cryptic "You Are the Hunted", which amps the hapless proposition that mankind has sentenced itself to death.

"Nations to Flames" rolls the bones and runs the table in its favor. Reflective more of industrial and splatterpunk than the dirge modes that have characterized A STORM OF LIGHT's more recent works, "Nations to Flames" is still joined at the hip by those core values of punched-up doom and explorative embellishments. We may be inevitably fucked as a world, but at least we have bands like this to give us fierce empathy straight to the bitter end.