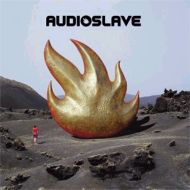 When word first surfaced about the teaming of ex-SOUNDGARDEN singer Chris Cornell with the remnants of RAGE AGAINST THE MACHINE — guitarist Tom Morello, bassist Tim Commerford, and drummer Brad Wilk — it seemed that there were two immediate reactions among fans of both bands: either this was the most ill-conceived collaboration ever, or a new supergroup that would save heavy rock from its recent nu-metal doldrums.

Well, AUDIOSLAVE — both band and album — is hardly the disaster that some thought it could be (that horrid name notwithstanding),but the project (which was nearly derailed earlier this year when management difficulties led Cornell to depart for a brief period) is also not quite an instant, rock-revitalizing classic. Instead, it is a solid, sometimes overly familiar, sometimes surprisingly beautiful first effort from a combo that is clearly an uneasy fusion of two of the most distinct hard rock sounds of the Nineties. At worst, AUDIOSLAVE merely sounds like RAGE AGAINST THE MACHINE overlaid with SOUNDGARDEN-style melodies and vocals, which is either a good or bad thing depending on your personal taste. But at best, the two individual parts — Cornell's vocals and the RAGE rhythmic juggernaut — meld seamlessly to open up a world of possibilities for this still-formative creation.

"Audioslave" opens with "Cochise", a sludgy stomp that is probably the closest to pure SOUNDGARDEN, as Cornell screams at his grungy best, a new, ragged edge adding texture and maturity to his voice. Ironically, the player who seems to mute his own proclivities the most is Morello, his usually zig-zagging, transmission-from-space lead squealing is restrained in favor of meaty, straightforward riffing.

Other rockers that tread sturdy, if well-worn, ground include "Show Me How To Live", "Set It Off" (which edges closer to RAGE territory, without singer Zack de la Rocha's lyrical manifestos),and "Exploder", but as powerful and groove-laden as these songs are, they sound like the kind of material one would expect from these four musicians, the sort of stuff they could "write in their sleep," to paraphrase Cornell in one recent interview. It is, ironically, on the softer numbers that AUDIOSLAVE finally begin to find themselves. "Like A Stone" is the album's standout track, a poignant, sparse, and somber meditation on death and regret featuring some of Cornell's most emotional vocals ever. "I Am The Highway" and "The Last Remaining Light" offer similar vibes, the latter even sounding like it could have come from Cornell's underrated 1999 solo effort, "Euphoria Morning".

That's not to say that AUDIOSLAVE is incapable of rocking out, or that their salvation lies in mellow, moody, singer-songwriter material. All it means is that these four artists, coming together not as an organic unit but almost as a business proposition, do have the potential to transcend the hype and marketing angles and write some material that is truly their own. Hopefully, if the band does continue with more albums, that potential will manifest itself in heavy, unique material that sounds less like its separate parts and more like a unified whole.

There's no doubt that Cornell, Commerford, Morello, and Wilk are four of the last decade's most talented heavy rock musicians, and that alone makes "Audioslave" an enjoyable, huge-sounding album that's well worth the time for both new listeners and fans of the previous outfits. But it's my suspicion that it will be the next album that will see AUDIOSLAVE shake off the chains of the past and become the supergroup that so many expect them to be. 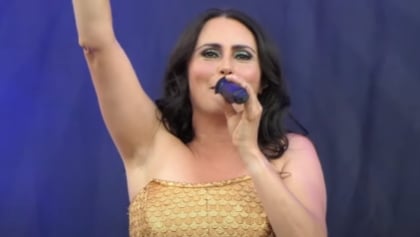