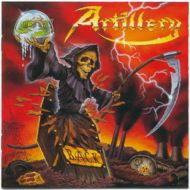 Once at the forefront of the then-burgeoning thrash metal scene, Denmark's ARTILLERY never quite managed to live up to its commercial and musical expectations, with the band splitting up shortly after the lackluster performance of its third studio album, By Inheritance, in 1991. Freshly reunited, vocalist Flemming Ronsdorf (whose vocal style is as much of an acquired taste as ever) and guitarists Morten and Michael Stutzer (drums on the album were handled by HAUNTED / WITCHERY / KONKHRA man PerM. Jensen) have made a comeback effort that is largely true to the band's early sound, but one that lacks the spirit of the original formation.

Essentially a musical hybrid of the band's last two studio albums, By Inheritance and Terror Squad, B.A.C.K. benefits greatly from the much-improved production, (presumably the result of AndySneap's involvement on the mixing side),but it falls short of the mark in the songwriting department, with the bulk of the material coming across as nothing more than a rehash of the group's past glories. Occasionally, as on the excellent "How Do You Feel", ARTILLERY manage to capture much of the riffing intensity that's always been their trademark, but such moments are few and far between. More often than not, ARTILLERY churn out derivative-sounding riffs amid some of the most banal and elementary-level lyrics we've heard in a long time (see "WWW" and "Theatrical Exposure" for more evidence of the latter),and in the process they tarnish yet another great band's legacy. Disappointing.