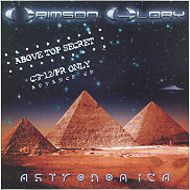 Yet another in the long line of recently reunited '80s metal bands, CRIMSON GLORY have obviously responded to the increasing popularity of traditional heavy metal on the European continent by regrouping in an attempt to rekindle some of their former magic. The quintet's first album with vocalist Wade Black (who sounds like a younger David Wayne),Astronomica is a relatively enjoyable release that musically touches upon some of the more memorable moments on the band's classic first two albums, with the group's trademark guitar harmonies making a much-welcome return appearance following their more subdued presence on the band's disappointingly LED ZEPPELIN-esque Strange and Beautiful release (1992). As before, the material spans a lot of different moods and emotions, from the high-energy stomp of "War of the Worlds" to the mellow, "power-ballad" vibe of "Edge of Forever", all of which showcase Black's impressive range, even if he tends to sound irritatingly thin when he hits the high notes (which he does frequently). At the end of the day, however, the absence of singer Midnight (who is said to be working on a solo project) and the lack of any material that could compete with the likes of "Lady of Winter", "In Dark Places" and "Lonely" off the group's monumental Transcendence release prevent this album from being anything more than a mere reminder of how good CRIMSON GLORY once were.