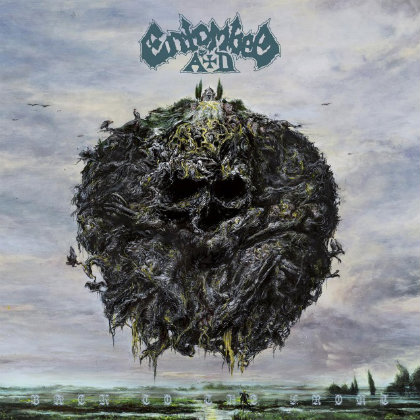 Back to the Front

Almost nobody saw this coming at first, until the announcement was made Lars Göran Petrov was kicking up an offshoot from ENTOMBED, currently in stasis. The band name is now co-owned and waylaid by the original lineup of ENTOMBED featuring Petrov along with Alex Hillid, Uffe Cederlund and Nicke Andersson.

Effectively a case of cease and desist, it's somewhat surprising Petrov gets away with rebranding the band name to ENTOMBED A.D. However, the reboot is official and it features members of the "Serpent Saints – The Ten Amendments" ENTOMBED lineup from 2007, including Petrov, Olle Dahlstedt, Nico Elgstrand and Victor Brandt. To some measures, the new album under the ENTOMBED A.D. brand, "Back to the Front", is a nod to the former's "Wolverine Blues". This comes mostly from its willful dynamics and entertaining tone shifts between thrash, punk, death metal and rock modes.

"Kill to Live" is a tricky opening number that rolls through straight-laced rock measures with L-G Petrov bellowing overtop. Occasionally ENTOMBED A.D. picks up speed on this track, but there's an arresting craziness to the methodology of the song. Menacing but nearly accessible on the verses, the chunkiness and ralphing that undermine the whole thing is weird yet badass. Some might say it's simply the old ENTOMBED mojo at work.

"Bedlam Attack" stays dirty and crunchy with faster plows that mince double-time through the verses, then it dashes away on the choruses. A mucky play on classic thrash with a death metal twist, ENTOMBED A.D. throws another curve with a dropped back bridge sequence conceding a strange but engaging sense of amity. Not many bands could pull this stunt off convincingly, but it works great here. Afterwards, "Pandemic Rage" mashes out of a killer intro featuring a panicky, slashing string section ringing like a lost Bernard Hermann arrangement. Bouncing between mosh and thrash modes, "Pandemic Rage" is delivered with the expected veteran acumen and loads of complicated chord progressions to give listeners something extra (aside from a ripping guitar solo) to key in on.

The mid-tempo troughs of "Second to None" are punk driven with hardcore-esque gang shouts posted on the edges of the choruses. L-G Petrov woofs along to the slamming thumps of the track. The jiving shift behind the guitar solo transitions to a creepy bridge with haunted guitar plunks before hoisting back into the main verve. "Bait and Bleed" then dishes slow-rolling crunch chords and gravelly barking to set up its thrashing choruses. Even better is the manic ferocity of "Waiting for Death", which will have ENTOMBED fans howling with delight by its concentrated velocity that pulls back only momentarily for a properly-executed breakdown and bridge combo.

The next curve of the album comes with the sluggish yet melodic "Eternal Woe" which shucks along methodically and features L-G Petrov attempting to sing-bark the choruses and doing a pretty good job, at-that. "Eternal Woe" has a momentary moshing pick-up during the solo but resumes the languishing crawl to the end with a bleeding guitar melody overtop. "Digitus Medius" keeps things on the slower side, but with more chomp than "Eternal Woe". "Digitus Medius" is content to trudge through sludgy bars with a brief hardcore tempo upsurge. Better, there are subliminal harmonies dancing amidst the dense mass of the song. Then "Vulture and the Traitor" once more changes gears with a clunky splice of punk modes delved between bobbing verse shambles and agitated hardcore stamps. In-between is a bass-knocking bridge that wanders into a prog mire for a spell. The whole scheme is nutty but as ever, it all gets pulled off audaciously. Ironic that Petrov's ending lyric here is "now you're completely insane."

"The Underminer" once more swings "Back to the Front" through another loop with thrash, mosh and death metal blasts, yet there's a careful strategy of planting delicate guitar frolics in-between all the chaos. Thus, "Back to the Front" is as much an ENTOMBED record as ENTOMBED A.D.L-G Petrov and his current cohorts serve their listeners a ton of coolness to reward their patience amidst recent turmoil. "Back to the Front" is bitchin' good fun, no matter what you call these guys.