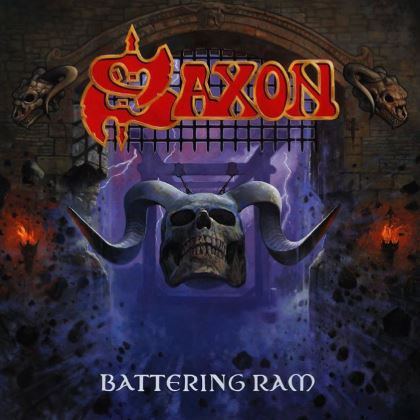 English metal-lords SAXON continue to show no signs of quit with their 21st (wowzers) album, "Battering Ram". Enjoying a prolific run under the same veteran lineup (with Nigel Glockler returning to the kit a decade ago),Biff Byford, Paul Quinn and the SAXON troupe give zero ounce of slack on "Battering Ram", which is pretty damned remarkable as the band creeps upon its fortieth anniversary. Actually, bulls into it is more the operative phrase as "Battering Ram" is another impressive, if prototype SAXON effort.

Perhaps the only real difference between "Battering Ram" and SAXON's most recent albums, including 2013's "Sacrifice", is that they are slightly heavier. Biff Byford notes the band dispensed with some of the rock 'n' roll elements SAXON has been playing around with and opted more for a, well, ramming effect here. The title track drops the listener against the iron barrier at the front of a SAXON show, comparing the experience to a metal church (no doubt a loving tip of the hat to their American power metal comrades) and "Battering Ram" launches as a tried 'n' true anthem.

Spooling a Hammer-esque narrative as the intro to "The Devil's Footprint", SAXON keeps the rhythm pounding with whirring riffs by Paul Quinn and Doug Scarratt, as Nibbs Carter and Nigel Glockler rumble effortlessly behind them. The solo section is a rip-snorting pleaser from the foursome, while Biff Byford continues to amaze listeners with how easy he makes it all sound. Here Byford hits a screech so gruesome at the end that you can't help but clench a fist of admiration. Even as "Queen of Hearts" slows things down, the tones are still massive, the riffs precise, while keyboards swirl and Biff Byford chimes and occasionally growls along with the song's gradual march. The acoustic-led breakdown on "Queen of Hearts" (pinpointing the critical moment of the high stakes chess game in "Alice in Wonderland") is solemn yet dignified.

"Destroyer" (as in Odin's indestructible harbinger of doom in the Thor comics) is Biff Byford's expressing his love of comic books, and it's a pumper. It's also fun as all-get-out, as is the hell-or-high-water mindset of the brisk "Stand Your Ground". On the heels of the hurricane-drenched, doomy "Eye of the Storm", "Stand Your Ground" flies at gale speed, a driving number worthy of the "Wheels of Steel" and "Strong Arm of the Law" days. The tag solo by Quinn and Scarratt on "Stand Your Ground" is short but sick, while the unexpected synthesizer swirls on the song's breakdown is a pleasant surprise.

"Top of the World" retains an energetic pulse for "Battering Ram", bringing in a bit of Eighties-bound power rock melody (LION, for example). The 5:51 "To the End" lumbers on a set of pounding, ZEPPELIN-ish riffs for the choruses, while reverting to more aromatic verses. It's a complex coupling that works despite the awkward transitions. "Kingdom of the Cross" strays and sojourns for 6:08 as Byford and the band powerfully hit upon World War I, using poetic parables of The Crusades, from where they derive their name.

Bouncing out of "Battering Ram" with the loud stomper "Three Sheets to the Wind", SAXON proves they still have the gusto much less the guts to wave the NWOBHM banner as if time stands still for only them. There is such an appreciable gleam to this band that it's going to take the end of days before SAXON packs it in. God bless 'em, everyone.