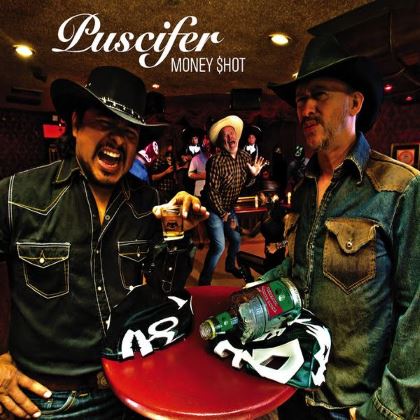 While the heavy music world continues to grumble in wait for TOOL's fifth album, reportedly in the works following family obligations and a looming lawsuit which has been settled, Maynard James Keenan drops another PUSCIFER slab upon his fans. As PUSCIFER has been Keenan's alt playground to coddle his artistic id, the collective's third full-length album, "Money Shot", is supposed pay homage to Keenan's native Arizona, and send a willful message of hope to his listeners.

Of course, having started this venture with an album titled "V is for Vagina", it's no wonder Keenan likens "Money Shot" to a "creative menstrual cycle". It's also a relative straight shooter compared to previous PUSCIFER albums, often running like a distant, more offbeat cousin to A PERFECT CIRCLE instead. PUSICFER has proven subject to change, thus "Money Shot" is hardly the same beast as "V is for Vagina" or even the aura dustbowl that was "Conditions of My Parole".

Having been a resting spot for Keenan's numerous co-conspirators to cultivate their industrial, coldwave, trip hop, electro and alt kinships, the PUSCIFER ensemble this time consists of Keenan along with Carina Round (vocals),Mat Mitchell (bass, guitars, banjo, keys, mandolin, programming),Jeff Friedl (drums) and Juliette Commagere (keys) along with drumming contributions by Jon Theodore and Tim Alexander, bass drops by Matt McJunkins and cello by Maynard's own son, Devo Keenan. The album was recorded in Maynard's Arizona-based winery, Caduceus Cellars.

Opening with "Galileo", Maynard and Carina Round (the latter figuring prominently throughout the album) swoon sweetly together in tandem to a blowy electro groove, thrumming bass lines and guitar plugs that sometimes threaten to pull the track into tougher turf. The song is more about keeping calm and letting the keys and guitars weave tapestries for the euphonious vocals. On the luxuriant and slow-moving "Agostina", Maynard lets his vocals fly forward and A PERFECT CIRCLE fans are going to really appreciate this track, as they will "Autumn", "The Remedy" and "Smoke and Mirrors". The faint guitar plucks on "Agostina" blossom into a kaleidoscope of sound on the choruses, including carousel-ish chimes spooling around the mounding guitars and keys.

The six-minute "Grand Canyon" and "Simultaneous" are the closest this album gets to the overt weirdness of "V is for Vagina". The blipped-up bridge ushers a bit of catatonia to the song's controlled chaos. Yet it's the vocals, led more by Carina Round than Maynard that gives "Grand Canyon" a spirit of grace amidst its thumping march. On "Simultaneous", Maynard rambles on in narrative form for nearly four minutes about whatever comes to mind—largely his impressions about a music festival, alongside a pumping electro pulse until an actual song manifests. Those who have been following Maynard's music are going to have no problem digesting this ridiculous configuration, particularly with a groovy payoff in which Keenan and Round chime along to Mat Mitchell's successions of guitar, bass and electronics.

The chewy title track is a bit more punk grounded with a loud, rapid and purposefully messy detonation. It's goofy, but it's also an ass-kicker. The echoing key chimes of "The Arsonist" sound derived from the backdrop score for a TV horror host, but there's undeniable glue to it. It gels nicely with the beat plugs and Carina Round's ghostly moans the deeper the track digs.

Round is Maynard's perfect complement on an album that tries often to streamline PUSCIFER's rollicking sense of the avant-garde. "Money Shot" retains PUSCIFER's spirit of recklessness, but in doses. The prolific profanity laced into "The Remedy" is more about throwing shock value into a straightforward though richly detailed alt track. While the song is beautifully composed and delivered, it's a tamed beast, like much of "Money Shot" ".

Maynard James Keenan will always be regarded by most as a genius who plays to his own musical whims, even if "Money Shot" feels like a full collaboration with his supporting cast—to the plus. The batty "Life of Brian (Apparently You Haven't Seen)" being an absolute gem for the silvery vocals alone. Nearly everything dealt is flat-out splendid, but the gripe to be had about "Money Shot" is the collision effect Keenan brings to it, making it feel more like an amalgam of his career than a full-on PUSCIFER release.