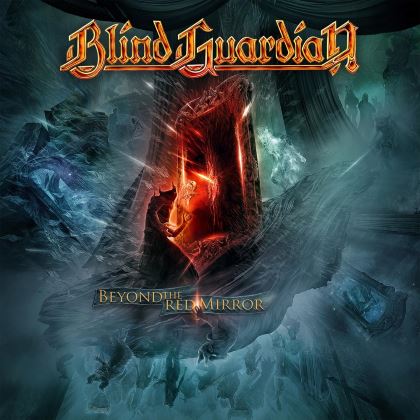 Beyond the Red Mirror

Previewing their tenth album "Beyond the Red Mirror" with the previously-released "Twilight of the Gods" EP, German power-symphonic metal maestros BLIND GUARDIAN capitalize on a long break with an encompassing and magical effort. For "Beyond the Red Mirror", the band worked with three different worldwide choirs from Budapest, Prague and Boston, along with two full-scale orchestras bearing 90 members apiece. The results are as larger-than-life as the band intended, fleshing out a sci-fi and fantasy piece bridged to their 1995 album, "Imaginations from the Other Side".

As "Twilight of the Gods" (one of only two songs to clock in beneath five minutes) proved to ring like a broad-scoped, QUEEN-esque musical sonnet, the rest of "Beyond the Red Mirror" is simply massive. Beginning and ending with two epics that roll at 9:29 each, this album plays like BLIND GUARDIAN's reach for a masterpiece, and they practically hit it.

You couldn't ask for a more breath-stealing intro with the gusting chorus opening the expansive "The Ninth Wave", a song stuffed as much with electronica buzzes and defined guitar lines as there are swarming voices. Hansi Kürsch, one of the best metal vocalists in the business, is nearly secondary to the enthralling choral tides that introduce and conclude the track. This could've been a near-ten-minute EP unto itself, that's how conclusive and meticulous the song is structured.

The decorative harpsichord setting off "Prophecies" is a delicious intro for André Olbrich and Marcus Siepen to plow through successions of IRON MAIDEN-derived chords and marching progressions. Why BLIND GUARDIAN gets away with it is due to the incredible vocal outpourings around them. Again, the majestic theater aspect of QUEEN plays into this track as much as IRON MAIDEN and it's the proficiency behind the delivery that makes "Prophecies" sing instrumentally on top of the wondrous voices around it. Equally enchanting is "At the Edge of Time", which keeps a frolicking back beat and spritely orchestral accompaniment behind Frederik Ehmke's gradual stamp. The delicate measures BLIND GUARDIAN puts behind the thrusting march of "At the Edge of Time" are astonishing to behold, no matter how many symphonic metal albums you've been exposed to.

The swift "Ashes of Eternity" gusts on the heels of Frederik Ehmke's fluid pounding, the breezing guitars and Hansi Kürsch's vocals, which toughen to full snarls at times, but never fail to exhale with full conviction. The gorgeous backing vocals add to "Ashes of Eternity"'s tireless drafts. Even more vigorous is "The Holy Grail" thereafter, which does HELLOWEEN and GAMMA RAY proud, much less HAMMERFALL and MANOWAR with its hurricane-speed tale of valor. Let the musical echoes of battle always sound this powerful.

The 7:56 "The Throne" is a metal opera unto itself while serving the album's overall goal in sweeping the listener from one riveting plane to another, transitioning the twenty years between "Imaginations from the Other Side" and this album. "The Throne" works a little harder to find its spark as the band and orchestral pieces thicken up the longer the piece rolls, but Hansi Kürsch valorously leads the way and put to the stage, this piece should sound even bigger, so long as all of its recorded parts are presented live.

What can be safely assumed is that the album's carnival-esque finale, "Grand Parade" will make it to their live forum. Cited by André Olbrich as the best song BLIND GUARDIAN has ever written, there's substance to this claim as it rolls, romps and cascades with all the gala these guys can load up. "Grand Parade" is a cheerful promenade for much of the ride with a thundering chorus ushering it along until a dramatic change in tone arrives with the first guitar solo, altering the course toward a valiant and clamorous bang. A return to the battle front with power metal thrusts and cinematic orchestration ram the song back to its original celebratory cavalcade for a triumphant finale. Indeed, this is the best song BLIND GUARDIAN has conceived. Phenomenal.

With no disrespect intended to their contemporaries, BLIND GUARDIAN delivers symphonic metal of the highest art on "Beyond the Red Mirror". How far these guys have come since "Battalions of Fear" is not only remarkable, it's tremendous. As Hansi Kürsch has described the story behind this album, the red mirror is a representative, lone-standing portal to purported salvation and it must be found at all costs. What BLIND GUARDIAN has found with this album is inspirational and it's inexcusable the Grammy committee has long kept a sightless eye toward these virtuosi of metal music.