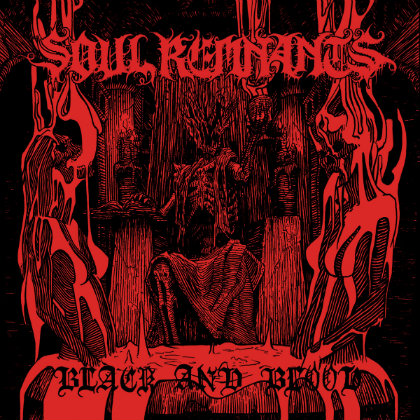 Getting past the goony title of their second full-length album, Boston death and black metallers SOUL REMNANTS put on a hell of a show with "Black and Blood", an album sure to remain planted in the players of death junkies, assuming they can wedge the new CARCASS album out.

The band features Tom Preziosi and Chad Fisher from ARMOURY on guitars, CANNAE's Colin Conway on drums, FORCED ASPHYXIATION bassist Ryan Murphy and growler Mitchell Fletcher. SOUL REMNANTS could be compared to a score of death metal notables, though SUFFOCATION is probably their closest link. What's most impressive about "Black and Blood" is that it stakes its gory business with every ounce of detail the band can summon from themselves and they extol with terrific efficiency. Most death metal albums have a lack of balance between exhibitionism (always a must in the wake of Chuck Schuldiner) and time allotment. Even though "Black and Blood" contains one eight-minute epic, the triumphant "Dead Black (Heart of Ice)", SOUL REMNANTS moves this album along fiercely and intelligently then slams the stop button after making their point.

The opening numbers "Chopwork II", "Cauldron of Blood" and "Incinerator" thrust for all this band is worth and they're worth plenty. The claim SOUL REMNANTS has to both black and death metal is evident most in these selections as Colin Conway flexibly works through rolling and rapid parts that not only accelerate, they jettison. Just when you think he can't go fast enough, Conway goes faster and he never falters when these songs allocate for momentary slowdowns. The mix of the album gets brutalized by Conway's crushing double bass, but Mitchell Fletcher makes his wailing presence known and SOUL REMNANTS' front line grooves along with tenacious shredding. Tom Preziosi, Chad Fisher and Ryan Murphy reserve their best acts, however, for the album's next succession of songs beginning with "Symptoms of Death".

The opening of "Symptoms of Death" muscles through its opening bars in what is undeniably a mashed-teethed kiss from the old Boston hardcore years before rocketing from that eddying swirl into a gruesome tornado. The same moshing intro smartly closes the number with an appreciable attentiveness to continuity. The sense of professionalism SOUL REMNANTS brings to the table is oozed from "Symptoms of Death" into the somber instrumental lead of the magnificently written "Dead Black (Heart of Ice)". Here Tom Preziosi and Chad Fisher exhibit their intricacies and adornments, at one point pulling their mid-range notes down into a gut-checking plunge before swerving back into the main key. What first sounds like a death metal version of a power ballad evolves into a mid-tempo whirl of grandiosity. If that's not impressive enough songwriting, stand by for a gorgeous acoustic interlude that sets up for a scorching black metal blast producing some of the most emotional guitar work you'll hear in this genre. You're not done there, so enjoy the constantly shifting ride to the eight-minute mark.

"Dead Black (Heart of Ice)" might be a showcase of this band's capacities all to itself, but SOUL REMNANTS hardly lets their listeners enjoy a moment to soak up that song's splendor before hauling them into the careening menace of "Rape Casket". While roaring so fast the listener is nearly grasping for anything to remain grounded, SOUL REMNANTS initiates a really cool skidding effect by Preziosi, Fisher and Murphy, setting up for a banging breakdown and bridge sequence. Here the listener is finally allowed to get their wits together before the band zooms back into action with imposing precision.

The echoing guitar pleats reverberating out of the solo section of "The Antifaith" is modest in execution but stunning in effect, since SOUL REMNANTS engages them out of a blast sequence then follows them with an exchange of slow and fast tempos to the finish. Finally, "Reanimation" closes the album with overwhelming grind and thrash patterns where Colin Conway throws out a tremendous amount of bpms and never loses his stride no matter how complicated his lines become. He's the one to key in on "Reanimation" and the rest of the band generously keeps to rhythmic, scaled-back riffs that lets Conway assume front and center. Preziosi and Fisher patiently wait their turn to lavish "Reanimation" with the album's most intricate solos and by the time they delight their audience, the whole album's done on the drop of a dime. Outstanding showmanship.

SOUL REMNANTS still has CARCASS and CHTHONIC in their way for dibs to title of the best death metal album for 2013, but "Black and Blood" is certainly one of the year's best stories in this sanction.