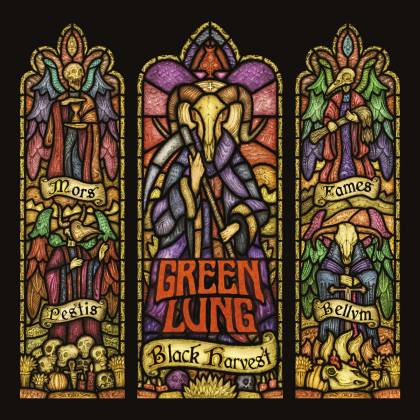 In the UK, and increasingly everywhere else too, people are going absolutely fucking nuts for GREEN LUNG. This London-based five-piece released their debut album "Woodland Rites" in 2019 and were swiftly (and justifiably) hailed as the best thing to happen to massive, Sabbath-fueled riffs, '70s proto-metal pomp and sledgehammer stoner rock for a very, very long time. Having been denied the opportunity to hit the road in support of their debut record, the Brits have simply cracked on and made another one. Pleasingly, it's even better than its predecessor and seems guaranteed to make a great number of new people go absolutely fucking nuts for this band.

The elements that collide to make the GREEN LUNG sound are all thoroughly familiar, and yet the end result feels gloriously fresh. With shades of everything from the rampant, organ-led bluster of DEEP PURPLE and URIAH HEEP; to the multi-layered ambition of QUEEN and the hazy menace of occult rock and psychedelic folk, both past and present, the songs on "Black Harvest" each feel like crafted mini-symphonies, as what often feels like the very best of everything blends together in exquisite harmony. Quite frankly, these boys are a bit too clever and talented for their own good, but there is no sense of calculation or artifice: everything from bombastic opener "Old Gods" to the elegant but cataclysmic sweep of closer "Born to a Dying World" rings true. This is the real thing, no question, but somehow elevated to a new level and skillfully tethered to some straightforwardly great songwriting.

"Graveyard Sun"'s dramatic sprawl encapsulates GREEN LUNG's brilliance across six minutes of richly peculiar psychedelic metal. It begins with an eerie, pastoral intro, before erupting into more of those aforementioned massive riffs, the nourishing rush of old-school keys, several prog-saluting dynamic detours and a bewitching vocal from a frontman who sounds like he has been floated in from another age. Much like GHOST before they started to amuse themselves a little bit too much, GREEN LUNG proudly evoke the past, but it's a weird and wayward past that only exists in the lysergic imaginings of today's space cadets and hallucino-geniuses.

If you haven't had the pleasure, this much hyperbole will probably appear silly. But just give "Black Harvest" (and "Woodland Rites", for that matter) the time it deserves, and you will soon be going absolutely fucking nuts for this magnificent band too. However you wish to label their idiosyncratic but utterly mesmerizing hybrid, GREEN LUNG have struck pure gold here.