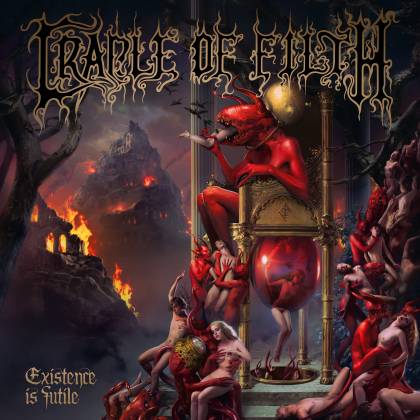 01. The Fate Of The World On Our Shoulders
02. Existential Terror
03. Necromantic Fantasies
04. Crawling King Chaos
05. Here Comes A Candle… (Infernal Lullaby)
06. Black Smoke Curling From The Lips Of War
07. Discourse Between A Man And His Soul
08. The Dying Of The Embers
09. Ashen Mortality
10. How Many Tears To Nurture A Rose?
11. Suffer Our Dominion
12. Us, Dark, Invincible
13. Sisters Of the Mist
14. Unleash The Hellion

Reaching album number 13 is a magnificent achievement for any band, and CRADLE OF FILTH arrive at that milestone in the strongest form of their wicked lives. Added to the fact that the ghoulish UK stalwarts are celebrating their 30th anniversary this year, "Existence Is Futile" is immediately identifiable as one of the strongest records they have made in a long time.

In truth, there have been very few low points over the last three decades, and CRADLE OF FILTH have only occasionally jumped their own snarling shark. In recent times they have become a model of consistency, and the band's current lineup (now including keyboardist / vocalist Anabelle Iratni, making her debut here) is so obviously firing on all cylinders that there is a sense of inevitability to the high quality of this album's fully fledged and ferocious treasures. Building on the era-spanning, holistic filth approach they embraced on 2015's "Hammer of the Witches" and 2018's "Cryptoriana — The Seductiveness of Decay", CRADLE sound more vicious and extreme here than they have in years, but with rather more theatrical detours and moments of perverse unpleasantness than on any album since "Godspeed on the Devil's Thunder" (and underrated gem from 2008). Total FILTH, you might call it.

While their unique formula remains largely intact, CRADLE OF FILTH's songwriting continues to mutate. "Existential Terror" is one of the most brutal songs they have ever recorded, and yet its hooks are razor sharp and sophisticated, its slowly evolving structure, both cunning and classy. Preview singles "Necromantic Fantasies" and "Crawling King Chaos" are both instant classics: the sound of a band with an absurd amount of confidence, gleefully selecting their most dangerous weapons and employing them with joyous arrogance. The former is a lush, melodramatic rush of feverish, mid-paced thunder; the latter is a snotty and symphonic flurry of white-knuckle punches, with strong echoes of "Midian" (still, for many, the definitive CRADLE record) and rolling waves of spiteful blastbeats. Similarly lethal is "How Many Tears To Nurture A Rose?" : a grimly melodic, gothic death squall with a chorus so irresistibly mournful and grand that even scowling black metal purists might be compelled to shed a tear. Elsewhere, "Black Smoke Curling From The Lips Of War" is as destructive and gleefully dystopian as its title suggests, "The Dying Of The Embers" is a schizophrenic prog metal fever dream, and "Suffer Our Dominion" is an oddly moving paean to the impending obliteration of life on Earth, with spiraling synths and a splendidly haughty vocal cameo from horror icon Doug "Pinhead" Bradley.

In fact, it's that slight hint that CRADLE OF FILTH are commenting on real-world events, arguably for the first time, that gives "Existence Is Futile" its unique edge. This is a top-notch album that fans of the band will instantly adore, but it's also a restless and authentically unsettling affair; reflective of the dark times we live in, but also a sincere tribute to the sturdiness our collective resolve as followers of the dark musical arts. If a band of this vintage can rage against the dying of the light with this much style, substance and intensity, there may yet be hope for the rest of us.