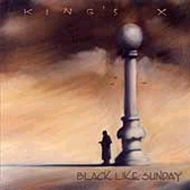 By turns both a frustrating and uplifting band, there is still no doubt that KING'S X could've — and probably should've — been huge. Leaving an indelible mark on everyone from the biggest (PEARL JAM) to the not-so-big (CROWBAR),it wasn't that they really made any radically wrong moves through their fairly unique BEATLES-with-a-distortion-pedal grind. It just seemed that the rock public didn't have their ears fully tuned when the likes of "Out Of The Silent Planet" and "Gretchen Goes To Nebraska" first thundered through the Atlantic Records stable a decade or so ago. Basically, they failed to recognize a good thing when it screamed "buy me!"

With their time on a major label now long gone, this brings us around to that frustrating side of the Texan trio. Rather unusually, given their freedom from the corporate taskmasters, KING'S X have stuttered and faltered ever since, randomly cranking out either wishy-washy psychedelia, or ultra-heavy bludgeon that largely lacked their killer songwriting punch. Which is why, theoretically, there should be high hopes for "Black Like Sunday" — a re-recorded collection of songs from their formative years as a band (many dating back to seven years before their "Out Of the Silent Planet" debut in '89).

Sadly, "Black Like Sunday" merely underlines again that they only hit their stride under the Atlantic wing. Whilst there's no disputing that all the ingredients were evidently there for Tabor (guitar/vocals),Pinnick (bass) and Gaskill (drums) back in the day — the light, airy choruses ("Finished"),the funk "Dream") and the spurts of blaring heaviness "Won't Turn Back") — there still isn't anything here that locks into the groove, whooshes off into the stratosphere and puts a big shit-eating grin on your face — as their "Dogman" album did in its entirety. Worse still, there are several occasions when the band re-discover their undesirable penchant for cringe-worthiness, such as the woeful "Six-hundred and sixty-six" devil-mocking chorus of "Bad Luck". Ugh!

Sometime in the future, there may be a second retrospective volume hitting the shelves. On this evidence, you shouldn't be breaking down the record store doors to get hold of it.