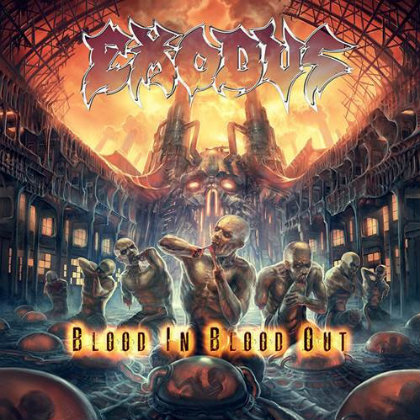 Blood In, Blood Out

Unfortunate enough Rob Dukes found himself the odd man out after fronting thrash legends EXODUS for nine years. The real spit in the face came with the nearly-unanimous dumping of Dukes by fickle fans once Gary Holt and EXODUS announced the return of Steve "Zetro" Souza to the mike. For a guy who carried the torch for this band through some their heaviest albums (i.e. "Shovel Headed Kill Machine" and the two "Exhibit" albums),whatever circumstances prompting his removal and engineering Souza's homecoming are best left within camp. Call it a raw deal for Dukes or simply a need to put all players on the same page, it's sadly prophetic that songs called "Salt the Wound" and "Collateral Damage" appear on EXODUS' tenth recording, one bearing an equally prophetic title, "Blood In, Blood Out". That being said, veteran EXODUS fans will be creaming their jeans after hearing this one.

As Souza last appeared on EXODUS' 2004 "Tempo of the Damned" album, for most fans, "Blood In, Blood Out" is going to ring true, no matter how monstrously heavy the band was with Dukes at the helm. For all of the hullabaloos behind Zetro's past tenures in EXODUS, he's all over this album in a major way and by attrition, the band throws its own retro, gang-shouting speed metal party, one finding METALLICA (and one-time EXODUS) guitarist Kirk Hammett on the guest list.

After a cyber-pumping intro for the leadoff song, "Black 13", (one of many clocking past the six minute mark) the shredding ensues and EXODUS pounds out a massive thrasher, chocked full of dizzying chord progressions and thrusting bass. Regardless of where you stand on the Dukes controversy, once Zetro hits his mark and screech-scats in tandem to the rolling speed, there's no denying the immediate chemistry he brings back. A checked-down bridge extends what might've been just as effective without it, but once the speed bursts back into play, "Black 13" goes balls to the wall with that classic thrash vibe that will have longtime fans howling with appreciation.

The zooming title track (inspired by Holt's recent viewing of prison dramas) is stuffed with gang vocals behind Steve Souza's blazing fast delivery, almost as a quicker homage to "Toxic Waltz". "Blood In, Blood Out" pulls back only enough to let the guitar solos sizzle and to dish up a superbly-crafted, melodic interlude before ripping away to finish as expected. The throttle stays well hot on "Collateral Damage" as Tom Hunting is colossal behind more mob shouts and Zetro's perfectly-dotted yelps. By this point, the rationale to bring Zetro back is well-served. "Collateral Damage" is a goddamn smoker, loaded with bpms, riff surges and glistening solos. Zetro's screechy enunciation is just the icing on the welcome home cake.

"Salt the Wound" pulls back to mid-tempo as Jack Gibson chimes his bass like D.D. Verni and Zetro (who's always borne a few shades of Bobby Ellsworth) shouts and hisses, hitting the riffs and beats with rigid timing. An extensive instrumentation sequence opens up the floor for Gary Holt and Kirk Hammett, who peel the paint together. Whether you're a METALLICA lover or hater, this is awesome stuff to behold.

"Body Harvest" resumes speed with methodic riff punctures and belting velocity on the verses, skidding things back for the slow, though no-less-heavy choruses and some ridiculously thick shredding on the bridges. It's safe to assume fans will be eager to join their own voices to the unified barks behind Souza on "Body Harvest". Afterwards, the 6:56 "Btk" is a power-pumping march piled with some of the album's best guitar slinging from Holt and Lee Altus (who are magical together on every song),notwithstanding their gorgeous, if abbreviated, intro to the vigorous and harmonious "Wrapped in the Arms of Rage".

The pummeling thrash on "Numb" defies to be beaten, even by EXODUS' peers and it's evident Gary Holt's second job in SLAYER only gave him more piss and vinegar to transfer to his home base. With the galloping force, burping bass plugs and Zetro bellowing all over it, "Numb" is fierce, even with its jiving breakdown and moshing bridges. Speaking of fierce, "Food for the Worms" just may be the best closing song on a metal recording this year.

While it's easy to empathize with Rob Dukes' predicament, the result of "Blood In, Blood Out" is an overwhelming success. This band is more recharged even than when pulling together "Shovel Headed Kill Machine" in 2005 and Steve "Zetro" Souza has plenty to do with it. The rest is left to some ingenious songwriting, punishing thrash and an old school refusal to die. Even the double-hammered breakdown on the slower "My Last Nerve" still deals some of the heaviest tones on this or any metal album to-date. This is one of EXODUS' finest outputs in their three-plus decades as a band and it deserves to become one of the toast albums of 2014. The cruddy circumstances leading up to it put aside, "Blood In, Blood Out" far exceeds what the fans could've wanted from it. Pared down to a simple sentence, this album is fucking sick.