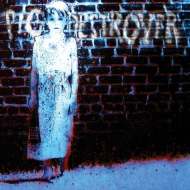 There's a saying in metal that's overused, but it well applies in the case of D.C. grind champs, PIG DESTROYER. This band is not for the weak.

Only five studio albums in a career spanning back to 1997, it's quality not quantity that makes PIG DESTROYER one of the finest of their ilk. Their projection is simplistic and brutal, like the old days of hardcore only with the benefit of modern technology. Living in the blistering shadow zone of MINOR THREAT and BAD BRAINS has left its mark upon PIG DESTROYER even if neither of those bands play into the latter's scheme. If PIG DESTROYER has any true punk roots (and they have plenty) outside of their grinding death and tech metal schisms, it's more in league with D.R.I., BROKEN BONES and the early years of C.O.C., all bands who turned thrash at one point or another in their careers. Set against a blistering filter in harmony with NAPALM DEATH, LAWNMOWER DEATH and MORBID ANGEL and an authentic, throat-choking antagonism, PIG DESTROYER has always been the real deal. "Prowler In The Yard", "Terrifyer" and "Phantom Limb" are already legacy albums of this tech-heavy subgenre. You can add PIG DESTROYER's latest, "Book Burner", to that esteemed list.

This genre colliding ethos is one of the reasons PIG DESTROYER are so adept at their deranged art. Their commitment to wiping away any slickness from their product in turn makes their albums far more imposing. The PIG DESTROYER manifesto is laden with pinpointed neural pricks, pokes and gashes courtesy of dastardly riff chunks and smelting speed designed to awaken and torment the cerebellum more so than eardrums.

"Book Burner" boosts the band's reputation even further with its gauntlet of blitzing grind and thrash modes, often delivered so fast the yeoman receiver will be left kayoed by the sixth track, "All Seeing Eye". Yet PIG DESTROYER manages to accomplish seeming hours of material in just over half an hour, a trick they've expertly managed in the past. Nineteen songs this time (as compared to, say, "Terrifyer"'s twenty),and PIG DESTROYER's customary claustrophobic aura of non compos mentis is established on the lead cut about an unstable sibling off her meds, "Sis". Hang on tight, kiddies.

Whereas CANNIBAL CORPSE celebrates splatter films at breakneck speed always with a firm tongue inside their ralphing cheeks, PIG DESTROYER is more about a systematic cerebral breakdown and its ensuing violent effects. Depravity more so than gore, counts in PIG DESTROYER's debauched world. CANNIBAL CORPSE is the "Cannibal Holocaust" of metal music. On PIG DESTROYER's "Book Burner", it's more like "Henry: Portrait of a Serial Killer" meets "Less Than Zero".

Frightening as hell, the lyrical content ricochets between psychosexual deviance, nihilism, drug addiction and accusatory backlashing against political and evangelical heresy. When in the nation's capital, right? "The Underground Man", "The American's Head", "Eve", "Baltimore Strangler", "Iron Drunk", "Dirty Knife" and "Valley of the Geysers" represent the bloodier doings of "Book Burner", while it's hard not to both condemn and sympathize with the laced out desperation strangling the muses behind "White Lady" and "The Bug".

As ever, J.R. Hayes shreds his esophagus apart and his projection contains the fiercest caliber of damn near anyone on the grind and death metal scenes. Even with a score of guest vocalists including MISERY INDEX/DYING FETUS' Jason Netherton bopping over to this sanguinary playground, Hayes commandeers "Book Burner" with abusive flogging that's almost always decipherable. MISERY INDEX drummer Adam Jarvis is the perfect harbinger of stop-go calculation to accent Scott Hull and Blake Harrison, who groove as much as they bombard. Every single song on "Book Burner" is to be studied deeper after the first spin. Every downstroke, every scale-happy solo segment, every mosh interlude, every escalating ratchet, all captured without gloss so the listener can hone in on each dexterous part. Even the harrowing siren soundbyte from "Aliens" scattered through the intro of "The Bug" is to be consumed as academic supplementation. This is why PIG DESTROYER remains one of the most relevant acts in grind today and why "Book Burner" is perhaps the most METAL album of 2012.