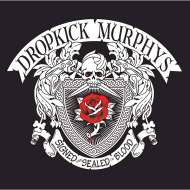 Signed and Sealed in Blood

Check your shillelaghs at Will Call, the Boston boyos are back in town.

As they announce on the first cut of their latest clover-roving romp, the DROPKICK MURPHYS are in your face once again and they're looking for trouble. Like FLOGGING MOLLY, Al Barr and his crunch bunch have reliably kicked up their punk-licked tribute to THE POGUES and PLANXTY for a generation's worth of tin-whistling, mandolin-plucking slam. While hardly delving into the sterner gnashing modes of North Ireland's STIFF LITTLE FINGERS, the DROPKICK MURPHYS are decidedly fiercer than Dave King's blue collar rabble rousers in FLOGGING MOLLY. Their common bond is their clamoring for unification between the Americas and the motherland with pints of Smithwicks (pronounced "Smitticks", you sods) amidst the collective din of sweltering Irish pubs and open-air punk festivals.

While the DROPKICK MURPHYS attempted with much success in 2011 to create a working-class concept album about their fabled factory-chained, knuckle-busting Cornelius Larkin on "Going Out in Style", this time they head back to the primary and just let things rip on "Signed and Sealed in Blood". The difference from this album, versus "Do Or Die", "Sing Loud, Sing Proud" or "The Gang's All Here" is its variance.

Like FLOGGING MOLLY, the MURPHYS have taken measures to prove they're more than a double-stepped one-trick pony. Both bands cue from GREEN DAY, the latter who have shown a propensity to bang and jive to apposite processes as if showing their deck of cards is shuffled with clean-swung aces and kings. "Signed and Sealed in Blood" is thus more than just a standard Celt punk record. Sure, there's Scruffy Wallace's thundering bagpipes roaring overtop the mashing opener, "Boys Are Back" and yep, count on Wallace to jerk and pull his tin whistle with an accompanying banjo and accordion on the brash street anthem "Battle Rages On". Meanwhile, "My Hero" and "Burn" are chest-swelled fast jams guaranteed to get the pits swirling.

Yet listen up on the melodic rocker "Don't Tear Us Apart", a sometimes raunchy, toe-tapping ditty in the vein of Bruce Springsteen and THE BOOMTOWN RATS. Springsteen lent a cameo on "Going Out in Style", so you know he left more upon the DROPKICK MURPHYS than just a bestowment of his vocals. Later in the album, you get a Fifties-meets-early Seventies rock 'n roll bopper with "Out On the Town" that seems well-met for a jukebox out of an old diner where swing-dancing once ruled. The trick here is the floating bagpipes overtop. They're placement is smarmy as hell. Then the hops-soaked closing track, "End of the Night" is likewise Springsteen-esque and is sure to become a new-tradition last call number in some bars worldwide.

"Out of Our Heads", "Prisoner's Song", "Rose Tattoo" (no connection to the Aussie bar rock legends) and the Johnny Cash-flirting "Jimmy Collins' Wake" are next-gen folk-fueled table pounders. The DROPKICK MURPHYS usher THE DUBLINERS and THE CHIEFTAINS into the ink and piercing era, while still carrying a proverbial shot of Jamison in one hand, a pint of the darkest froth in the other.

A prevalent cheer and frivolity counter the very few moments of darkness on "Signed and Sealed in Blood". The album's true gut-buster is "Season's Upon Us", perhaps the nuttiest and nastiest anti-Christmas carol you'll ever hear. With family like this, indeed. Still, there's a mostly welcoming candor to "Signed and Sealed in Blood" with roundabout means of rock, folk and punk for multiple tastes. The DROPKICK MURPHYS are most potent set on speed, yet they have the veteran discipline to color their albums these days with much more than a punk palette. You may or may not appreciate GREEN DAY, but the lessons they've taught in the second era of their careers has had a noteworthy spillover effect upon their contemporaries. For sure, the DROPKICK MURPHYS wouldn't have drummed up a smart and giddy floor stomper like this in the Mike McColgan years.