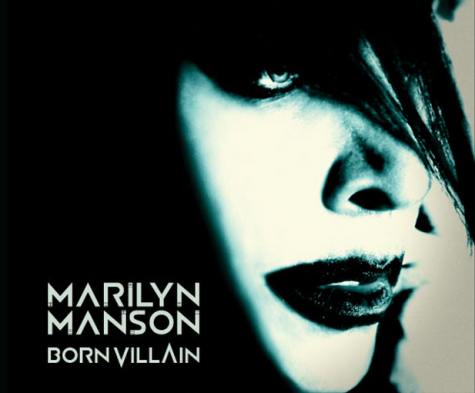 Get past the shocking images and purposeful controversy and when it comes right down to it MARILYN MANSON has survived, thrived, and released some great albums and equally great songs over the years. Even with the occasional misstep, the band's legacy is intact as one based on over the top entertainment matched with songwriting chops. On eighth album "Born Villain", the MARILYN MANSON sound has in large part been stripped of all but its most primal elements and ends up as one of the heaviest albums the act has ever made, while maintaining a knack for penning tunes that lodge in the brain for long term enjoyment.

Though no one prior effort succinctly captures the style employed on "Born Villain", the metallic punch certainly reminds more of albums like "Portrait of an American Family", "Antichrist Superstar", and "Holy Wood". More than anything this is fundamental MARILYN MANSON from the standpoint of in-your-face impact, bolstered by a production that is heavy on the low-end, thick on the riffs, and injected with a dark vibe that is downright hellish, this time with a pronounced emphasis on lyrical self-expression. The fist-first approach makes the comparatively sparing use of electronics and industrial elements more impacting and nuanced. Just as important, the material can still make one feel a little dirty and a lot unsettled, regardless of the fact that MARILYN MANSON's days of being the biggest shocker on the block are long past.

Song-wise, it is debatable whether "Born Villain" features classics-in-the-making like "The Beautiful People", but there is no question that "No Reflection" (with yet another twisted video) and "Hey, Cruel World" are in the running. Both are standout cuts and quintessential MARILYN MANSON. A bruising title track that comes with a macabre Shia LaBeouf (of "Transformers" fame) directed short film and some take-control drumming is one approaching that level as well. Obsidian nods to the likes of KILLING JOKE and JOY DIVISION are, in fact, present in a vague sense and not simply name-dropped by Manson for press release purposes. When the stylistic switches do occur the changes are welcome, as is the case on what one might term a ballad-esque cut called "Breaking the Same Old Ground" and on Manson's devilish version of a blues dirge called "Lay Down Your Goddamn Arms" that ends up the album's creeper/sleeper. The bonus cover of CARLY SIMON's "You're So Vain" (featuring none other than Johnny Depp) is more than just a wicked rendition; it is an appropriate choice on several levels.

Any MARILYN MANSON album released at this point in the band's career will be judged in light of those aforementioned classic albums, so much so that objectivity for the work at hand will too often fall to the wayside. Don't get sucked down into that chasm of the shallow. "Born Villain" is a rock solid, hard as nails MARILYN MANSON album that should make the loyalists giddy.