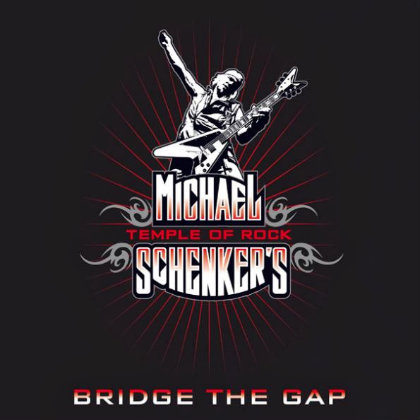 Time and tide, as they say.

It's been since 1979's "Lovedrive" that former SCORPIONS cohorts Michael Schenker, Herman Rarebell and Francis Buchholz were last together on record. Cool to see these guys allied once again in 2014 under the banner of MICHAEL SCHENKER'S TEMPLE OF ROCK. The mere proposition should plant smiles upon the faces of veteran rockers. Schenker brings along journeyman vocalist Doogie White (who seems to be landing everywhere these days) and guitarist/keyboardist Wayne Findlay, also aligned with former SCORPIONS shredder Uli Jon Roth. White turns in one of his best performances for TEMPLE OF ROCK's debut album, "Bridge the Gap", which should largely meet most people's expectations, even if replication rules throughout.

Nothing here really sounds much like the SCORPIONS, UFO or MSG, which is to the good since Schenker and his companions hardly need to rehash their own pasts. Instead, DIO plays a heavy hand in many of these songs ("To Live for the King", "Temple of the Holy", "Bridges We Have Burned", "Dance for the Piper" and "Black Moon Rising", for example) while the overall theme is strict power metal and melodic hard rock. The faster cuts like "Horizons" and "Land of Thunder" ring like a merge between SAXON and Yngwie Malmsteen, though the guitar theatrics are less overt. Doogie White even morphs a little Biff Byford into his delivery on these tracks for good measure.

Schenker and his stable employs a simple strategy with "Bridge the Gap", which is to celebrate the riff versus the flash. Michael Schenker's solos are tasty and better, tasteful. Sometimes his solos are chunky and static-laden, which is appreciable dirtiness to a largely clean-sounding album. Most of the time, Schenker gets in and fades out, or he wraps a song poignantly. Often he'll plant harmonious sub-melodies beneath the main groove of a song like "Land of Thunder" and "Temple of the Holy". However, Schenker is merely the illustrator and partial colorist of his band. It's the drives that matter more than the decoration and TEMPLE OF ROCK sounds like five dudes having a blast with each other.

One of the pure rockers and most memorable tracks on "Bridge the Gap" is "Lord of the Lost and Lonely", even if it haunts of latter year DEEP PURPLE. Doogie White, ever the chameleon, treads into Ian Gillan turf at spots on this song and the tempered organs by Wayne Findlay keeps an omnipresent PURPLE air about things. Yet the drive of this song is what counts and TEMPLE OF ROCK is very effective as a unit here. Later, DEEP PURPLE and DIO meet head-on in "Rock 'n Roll Symphony" with its headstrong pump and killer solo by Schenker in the outro.

Herman Rarebell and Francis Buchholz may represent the secondary palettes here, but as expected, they make a tight and banging rhythm section. They keep rhythmic, mid-tempo time since most of the songs call for it and it sounds like Michael Schenker couldn't be happier with his collaboration with them. "Dance for the Piper" might be one the happiest cuts the one-time SCORPIONS brethren laid down together, that, along with "Rock 'n Roll Symphony", "Lord of the Lost and Lonely" and "Land of Thunder".

As sharp as Doogie White is all over this album, Don Dokken nearly steals the show altogether with the acoustic-spun finale, "Faith". Schenker appropriately saves his finest repertoire for this song. The Medieval-glistened guitars and frolicking mandolin are gorgeous here, while Dokken sounds perfectly relaxed, closing the album with panache.

The only real glaring issue with "Bridge the Gap" has to do with how far a few of the guitar parts are pushed ahead of the rest of the mix. It's not a repeat offense, but when it happens, it's like an audible knife. The brief acoustic solo during "Where the Wild Winds Blow" is so up front it sounds like the remainder the band is shoved into a closet. The electric solo on the same song is better mixed but likewise sounds distant; even Francis Buchholz gets momentarily lost in the mix. Then the mix to "Because You Lied" is so focused on Schenker and Herman Rarebell you hardly hear Buchholz and Findlay as Doogie White echoes in and out.

Otherwise, "Bridge the Gap" is a pleasurable if repetitive ride for never-say-die purists who probably never saw this alliance coming but are rejoicing nonetheless.