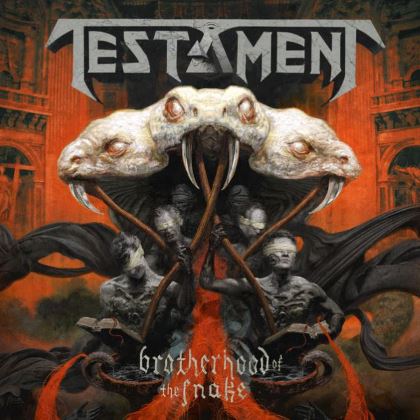 Brotherhood of the Snake

Using the superlative "instant classic" comes with responsibility. It is also subjective. Thrash titan TESTAMENT has been on a hell of a roll since Alex Skolnick rejoined the band. This is a universal opinion. "Dark Roots of Earth" and "The Formation of Damnation" have made nearly every TESTAMENT fan proud, but what's come from the band as of its eleventh album, "Brotherhood of the Snake", well, subjectivity rules. For the second time this year, along with DESTRUCTION's "Under Attack", I am compelled to tag the words "instant classic" on an album.

TESTAMENT has taken four years between each of its three most recent albums, including "Brotherhood of the Snake". It cannot go understated how quality vs quantity rules in the long term—this even with the year apiece separation between the immaculate four albums spanning 1987's "The Legacy" to 1990's "Souls of Black" with "The Ritual" coming a mere two years after that, and "Low" another two beyond. In the time between "Dark Roots of Earth" and "Brotherhood of the Snake", Greg Christian departed the band a second time, with SADUS bassist Steve DiGiorgio once again taking his place. Call it a good or bad thing as you see it (again, that subjectivity),but DiGiorgio and Gene Hoglan have helped TESTAMENT step up its game, this considering the band remains one of the class-elite thrash acts still working the scene. "Brotherhood of the Snake" revisits TESTAMENT's past, while moving the band to an entirely new plane. Much of this has to do with DiGiorgio and Hoglan's dexterity, while owing a big portion to the tremendous songwriting.

Chuck Billy states "Brotherhood of the Snake" is inspired (as told by Sumerian scriptures dating more than 6,000 years ago),by a reputed secret society of the same name founded by a Draconian alien attributed to Ea, sometimes known as Enki. According to said writings, man was created by Ea as the hybrid race we know as homo sapiens, to serve as slaves to mine Earth's minerals and gold. The Brotherhood of the Snake, or simply "The Brotherhood," was formed to enlighten mankind in secret, to debunk most manners of religion, and in the last 2000 years, particularly Christianity. "The Brotherhood" has evolved over the years to form offshoot orders such as the Freemasons, the Rosicrucians, the Knight Templars and the Knights of Malta.

Moving on from our history lesson, TESTAMENT expertly commandeers some of the heaviest and fastest output it's yet attempted. Because Gene Hoglan can blast beat with the best of them, tracks like "Stronghold", "Centuries of Suffering", "Black Jack", "Canna Business" and "The Number Game" quake as much as they fly. No disrespect to Louie Clemente, whose rapid sparks gave TESTAMENT its thrashing verve back in the day. However, there's a world of difference between the drumming on "The Legacy" and "The New Order", and what Gene Hoglan has done over the course of these past two TESTAMENT albums. Hoglan's nimbleness and rumbling fills surpass even the stellar Paul Bostaph, and "Brotherhood of the Snake" will stand as one of Hoglan's genius outings.

Even when taking on the straightforward Clemente-esque (ala ""The New Order" and "Practice What You Preach"-era) mosh rhythm on "Neptune's Spear", Hoglan spices the hammering drive with sophisticated triplets and fills. Accordingly, Alex Skolnick and Eric Peterson respond with guitar lines whisked from the same period of TESTAMENT's career, and the songwriting on "Neptune's Spear" is so shrewd it later changes the dynamic altogether. This becomes one of the album's most potent attributes: the numerous times it honors TESTAMENT's past with the full intent of pushing it all forward.

"Centuries of Suffering" is straight out of "The Legacy" days, with some of the same chord progressions alongside Chuck Billy's guttural woofing. Yet there's a contemporary dress-up to the blazing speed which only intensifies the longer the song whirls. One might even say Sumerian soothsayers NILE had an influence over "Centuries of Suffering" with Gene Hoglan cranking the song into grind turf at times. On the opposite extreme, "Born in a Rut" shucks along "Souls of Black"'s rock-based grooves as a breath-catching respite from the dramatic retelling of Exodus (the biblical version, not the band) on "Seven Seals". "Born in a Rut" may glide instead of thrash, but that doesn't mean Gene Hoglan won't drop double hammer to slam home the crushing tempo alongside Steve DiGiorgio's punctuating bass. Alex Skolnick and Eric Peterson retort with a slick set of riffs and an even shinier solo section. As ever, this duo pleasurably sparkles all the way through this album.

The title track rains all over the listener with some of the album's trickiest progressions and wildest alternations between groove and thrash. Ditto for "The Pale King", which offers more than stamps, shreds and speed as the song moves along. Each bar in the final minute of the song grows more wondrous and daring, stopping on a dime at the height of climax. Then the massive breakdown cased inside the manic flurry of "The Number Game" is one of the greatest you'll ever hear in this genre. It leads to a spectacular finale where Alex Skolnick and Eric Peterson march their guitar solos alongside Gene Hoglan's procession as set up for a glorious thrashing reprise.

While much of "Brotherhood of the Snake" stays in concept, TESTAMENT dishes a few standalone theme songs. The best being the Vegas-directed invective "Black Jack". This one's downright hilarious as Chuck Billy (whose pentameter all over this album is metal laureate) gripes "7-11 I still cannot win, snake eyes just won't let me be…stakes are high and so am I, you bet your life I'm alive, no lady luck on my side…".

"Dark Roots of Earth" was masterful enough; "Brotherhood of the Snake" is, astonishingly, thrash virtuosi taken to yet another level. Thirty years from when thrash began to explode, its senior ambassadors MEGADETH, ANTHRAX, DESTRUCTION, DEATH ANGEL, SODOM and, of course, TESTAMENT have served up one clinic after another. Mark it for metal posterity: 2016 is going down as one of thrash's greatest years, and "Brotherhood of the Snake" is an instant classic.