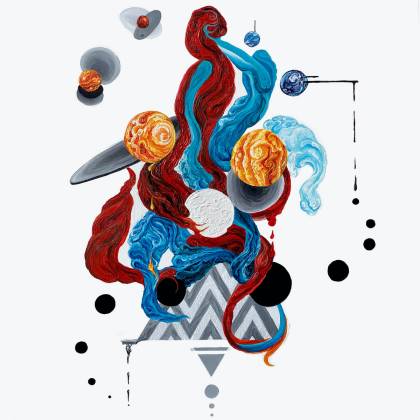 At a time when the outside world seems more menacing and hostile than ever before, "Cactides" is an album you can crawl into and hibernate from the insanity. Led by relentlessly ingenious guitarist Sally Gates, this avant-metal trio make music that defies the usual laws of melodic physics, slamming angular noise rock, free jazz and monolithic post-metal together in a bewildering shower of malformed, monochrome sparks.

Opener "Morphing Machineminds" is simply staggering: six minutes of flailing riffs, deeply wonky detours and clangorous crescendos, it ebbs and flows through warped vistas and semi-improvised bliss, before reaching a grinding halt that will make all but the most adventurous listeners wonder exactly what the fuck just happened. Significantly, "Morphing Machineminds" is easily the most conventional song here, but do wear a helmet if you're sensitive to strange noise. "The Starthinker is Obsolete" starts like a post-trauma PRIMUS, spirals away on a succession of ugly, atonal riffs and then veers off into swivel-eyed skronk-rock territory, all with Gates's unconfined inventiveness skittering across the top of drummer Kenny Grohowski and bassist Matt Hollenberg's amorphous, pulsing backbone. The song's latter half threatens to eat itself in a fit of jazz reverie, but a closing barrage of lobotomized churn whips the rug from under our feet once again.

Loping into life via an insouciant, discordant blues riff, "Tycho Magnetic" is TITAN TO TACHYONS' slow-motion apocalypse moment, with doomy overtones, loose-limbed swagger and multiple rhythmic twists. Exhibiting levels of swing that are seldom heard in extreme metal, Gates, Grohowski and Hollenberg audibly enjoy sublime levels of intuitive chemistry, making every tonal shift sound spontaneous but eerily precise. Grotesque and unsettling, "Earth, and Squidless" is the darkest of these pieces, like old-school prog rock reimagined as shapeshifting, obsidian ooze, powered by clattering blasts and Hollenberg's eviscerating bass tone. The solo that Gates peels off at the three-and-a-half-minute mark blazes and sparks with the spiritual fervor of classic MAHAVISHNU ORCHESTRA, while the song's subsequent breakdown is as stripped down and hypnotic as CAN at their "Tago Mago" peak.

Meanwhile, assuming that your brain hasn't sloshed out of your earholes by the time you reach grand finale "Everybody's Dead, Dave", "Cactides" concludes with nine of 2020's most mind-frazzling minutes of music available to human ears. Fans of psychotic post-metal acts like THE FLYING LUTTENBACHERS and CLERIC should feel perfectly at home amid this riot of amphetamine jazz-punk and feverish sound subversion, but TITAN TO TACHYONS never spend more than a few seconds sounding like anything we've heard before. This is a brave, belligerent, eccentric and immersive record that wears its complexity lightly while also being a work of profoundly disturbed/disturbing art. The perfect soundtrack for this year's sustained clusterfuck, I'd say.