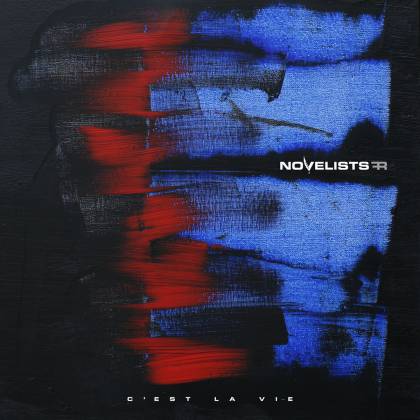 Call it djent, call it tech-metal, call it whatever the hell you want at this point: there's still a huge amount of this stuff around, isn't there? And whether you can't get enough of it or feel that this proudly state-of-the-art subgenre has long since run out of gas, NOVELISTS FR seem to have found one highly credible way to outlast their aspiring post-PERIPHERY peers. It might seem like stating the obvious, but NOVELISTS FR have focused almost entirely on crafting great songs for their second full-length album. If 2015's "Souvenirs" debut seemed a little perfunctory and cookie cutter in part, it did at least showcase a gift for non-standard melodic hooks. "Noir", 2017, was far better and contained a handful of thrilling, tech-friendly moments. But on "C'est La Vie", the French band go for broke, eschewing the elaborate complexities of djent's cerebral contingent in favor of a bright, shiny and endlessly accessible strain of subtly prog-tinged metalcore. In contrast to the hordes of bands still peddling distinctly unimaginative variations on metalcore's early-'00s blueprint, NOVELISTS FR sound liberated by their resistance to the utterly fucking obvious.

"C'est La Vie" stands or falls on how much impact these tunes have first time around. There are plenty of bendy riffs and flashes of electronic trickery to keep the djent purists happy (if, indeed, such people exist),but songs like "Somebody Else" and "Kings of Ignorance" are proudly straightforward rock songs at heart: it's just that they arrive wrapped in the textures and tones of more left-field fare, resulting in an often invigorating and indecently perky new hybrid. Getting to the point quickly suits NOVELISTS FR well, and frontman Matteo Gelsomino has one of those gently distinctive voices that rescues more generic moments from sounding too, well, generic. At its best, as on the uplifting sugar rush of "Deep Blue", "C'est La Vie" sounds like an album with huge mainstream potential, give or take a polyrhythmic tic or two.