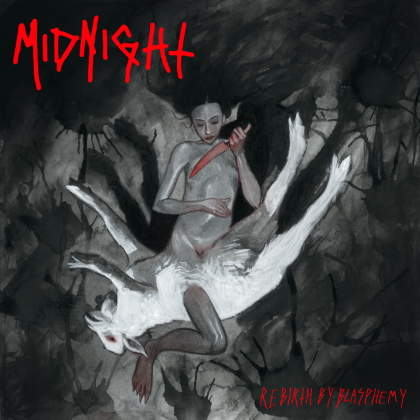 You know exactly where you stand with the music of MIDNIGHT. Since giving the whole notion of old-school metal a resounding kick up the backside with their early demos and 2006's "Complete and Total Fucking Midnight" comp, Athenar's one-man mission to make metal filthy and hard as nails again has been an absolute joy to witness, particularly if you have excellent taste in all things heavy. In a sense, MIDNIGHT have never told us anything that we didn't already instinctively feel: the best underground metal has always had a certain ragged, anarchic and violent quality that sets it apart from the polished precision of the mainstream. But by constantly reaffirming the ageless power and influence of MOTÖRHEAD, DISCHARGE, VENOM and POSSESSED, albums like 2011's "Satanic Royalty" and 2017's "Sweet Death and Ecstasy" seem to have lit a fire underneath the whole diehard metal scene. As a result, there will be a vast number of people for whom "Rebirth by Blasphemy" is an absolute no-brainer must-have and, as expected, it delivers on all filthy fronts. The first track is called "Fucking Speed and Darkness", for Satan's sake. What else could you possibly need?

If you're looking for progress from previous records, MIDNIGHT will not be playing your simpleton's game. This is true blue, red-blooded and riotous heavy fucking metal, delivered from the heart and spiritually connected to the genre's unmovable essence. Or, to be slightly less pretentious about the whole thing, "Rebirth by Blasphemy" rages, rocks and rampages like a maniac for 34 blissfully brutal minutes. It's unapologetically raw and rough around the edges, but songs like "Escape the Grave" and the truly exhilarating "Rising Scum" pack such an almighty, infernal wallop that this fourth full-length feels like a rather haughty reminder of MIDNIGHT's utter superiority over their peers. Quite how or why Athenar is able to churn this stuff out with such consistency is anyone's guess, but whether through devilry or design, "Rebirth by Blasphemy" is joyously black as fuck and 100% unmissable for those in league with Satan. All hail!