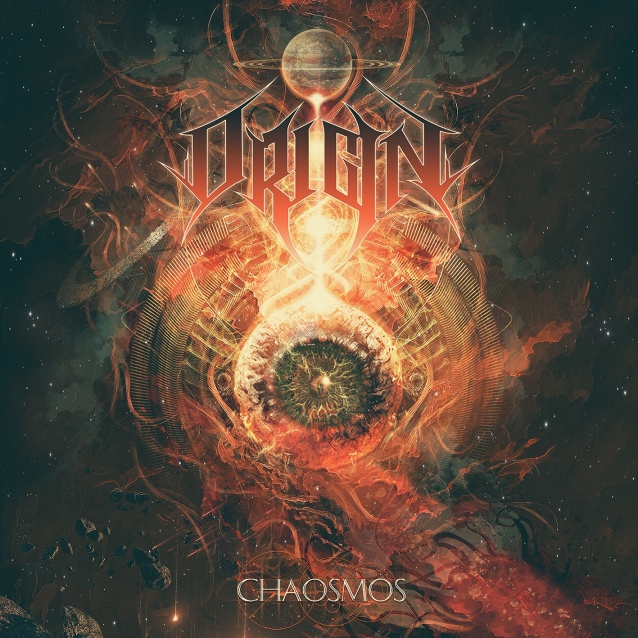 Thanks to largely unchallenged levels of virtuosity, ORIGIN have been a benchmark for technical death metal for more than 20 years now. Guitarist Paul Ryan's vision hasn't altered a great deal over the years, but neither has his band's ability to crush skulls in the most precise and devastating of ways.

If anything, "Chaosmos" is the catchiest ORIGIN record yet. Obviously that claim comes with the caveat that a solid majority of the music on their eighth album is played at speeds that boggle the mind and defy the laws of physics. But nonetheless, "Chaosmos" is a surprisingly straightforward death metal record. It also feels noticeably less clinical and sonically computerized than some of ORIGIN's earlier records, with the riffs being allowed more room to breathe than was ever the case in the past. The result is songs like opener "Ecophagy", which erupts in true ORIGIN fashion, with a blur of impossible blastbeats and blurred-finger fret-frenetics, before a warped and crushing groove wrenches the steering wheel leftward. A false ending gives way to a particularly nourishing old-school rampage, and, within a mere four minutes and eight seconds, Ryan's crew have pretty much annihilated all comers once again.

Playing with this much technique and flair doesn't always lead to great music, but ORIGIN have honed their songwriting over the years. As a result, something like "Nostalgia For Oblivion" feels crafted and dynamic, eschewing the nine-riffs-per-minute batshittery of all-out brutal death metal in favor of structural ebb and flow, laced with unhinged but memorable hooks. The title track is a perfect, three-minute showcase for the dexterous genius of all concerned, but when a lurching, mid-paced grunt-metal riff kicks in midway through, ORIGIN's collective chops matter slightly less than their shared ability to make discerning listeners want to run through brick walls. Meanwhile, the closing "Heat Death" embraces the irresistible, pit-starting power of machine-gun beatdowns, before scorching off into some kaleidoscopic void with drummer John Longstreth blasting at inhuman velocity. A gloomy, ultra-gothic coda provides "Chaosmos" with a fitting fade to black.

There is no doubt that ORIGIN are among the most adept musician in all of heavy music, but on "Chaosmos" they wear that reputation lightly, and deliver a coherent and curiously accessible slab of cracked and cosmic tech-death. More of the same, then, but somehow ever cooler.