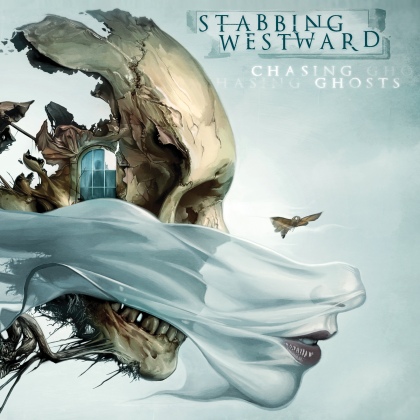 There was a time when bands like STABBING WESTWARD sounded like the future. Purveyors of a bombastic but streamlined strain of industrial rock, the Illinoisian crew released three major label records in the '90s and received plenty of critical acclaim in the process. Heavily influenced by NINE INCH NAILS, DEPECHE MODE and MINISTRY, but undeniably distinctive in their own perpetually gloomy way, STABBING WESTWARD were very much a band of their time. Twenty-one years on from what was assumed to be their final, self-titled and independently released studio album, the band led by vocalist and multi-instrumentalist Christopher Hall are back to posit the notion that they are very much a band of this time, too. Superficially, "Chasing Ghosts" suggests that nothing much has changed over two decades, but somehow this sounds every bit as timely as its predecessors.

For those hoping for a worthy successor to 1998's "Darkest Days", "Chasing Ghosts" works very hard to fit the bill, at least early on. The only real downside to STABBING WESTWARD's fourth album is that it is so obviously front-loaded with its catchiest tunes. Opener "I Am Nothing" is all textbook gothic angst and industrial churn, "Damaged Goods" owes far too much to NIN's "Head Like A Hole" and "Cold" makes it a neat hat trick of box-ticking anthems with a stomping cyber-disco beat and a lethal chorus hook. Thereafter, however, "Chasing Ghosts" blossoms into a far more interesting record. "Push" makes no bones about its debt to THE CURE, but it's only a passing resemblance: as the song evolves, it becomes a towering, stately arena-rock anthem, with an extraordinary Hall vocal that absolutely promises to reach the people in the cheap seats. "Wasteland" returns to STABBING WESTWARD's safe place, with chunky MINISTRY-style riffs and a big, simple refrain, but "Control Z" jitters and bleeps like a metallicized CABARET VOLTAIRE, underpinned by a sledgehammer pulse and infectious digi-riffing. "Crawl" is a somewhat perfunctory alt-rock ballad, and arguably the album's weakest moment, but that momentary lapse is forgiven and forgotten once "Dead/Gone" skitters into earshot, with its bubbling, faux-techno underbelly, and bursts of riotous robot-metal. Equally great is "Ghost", which gleefully cranks up the rasping '80s synths amid a whirl of grinding mechanics and pop sparks. Impressively, Hall's voice sounds stronger than ever throughout.

The closing "The End" is the only moment on "Chasing Ghosts" that dares to think fully outside the box. An undulating haze of black ambience attached to a wonderfully melodramatic melody, it provides a dark, dubby and progressive contrast to everything that precedes it. It also suggests that STABBING WESTWARD may only be scratching the surface of their renewed potential here. Either way, it's good to have them back.