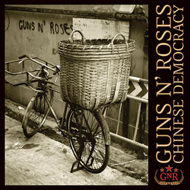 After 17 years, six producers, enough musicians to start four new bands, an army of assistants, a bailout-sized budget and who knows how much actual recording time and hard drive space, "Chinese Democracy" has finally arrived. And of course the question is: what is worth it? Was it worth the wait, the time, the money, the hype, the mystery? The short answer is no. In fact, there's no way it could be worth all that.

That doesn't mean it isn't a pretty good album, with moments of greatness. But context is everything, and against the backdrop of all the behind-the-scenes drama and mythology built around this project, it was almost contractually bound to disappoint in some way. If it had come out 10 or 12 years ago, its lack of fundamental greatness and spark might have been noted and we all would have moved on to the next one. But arriving now like some mad scientist stepping out of a time machine, "Chinese Democracy" feels more like a curio and less like the epic rock album that Axl Rose probably intended it to be, all those years ago.

First of all, let's call it what it is: this is not a GUNS N' ROSES album. You can alter the lineups of some bands more than others, replace singers or guitarists or even large chunks of personnel, but you can rarely replace an entire band, especially one made up during its peak years of such distinctive personalities, and still expect people to pretend it's the same. GUNS N' ROSES as we knew it has been gone for more than 10 years, with the departures of Slash and Duff McKagan providing the final nail in that particular coffin. The ever-shifting lineup of musicians we've seen over the intervening years has nothing to do with the image, attitude and dangerous magic of the original GN'R, and everything to do with who was patient and well-paid enough to cool their heels while Axl painstakingly worked out his demons and ground out this album. Like its title suggests, "Chinese Democracy" is an album made by an illusory GUNS N' ROSES, an illusion that Axl has used to brand what is essentially a solo album. Only he knows whether he thinks GUNS was his brainchild all along, but for many of us who saw the original band, it was less about him alone, as forceful and magnetic as he was, and more about the spontaneous combustion generated by a collective that was at one point considered the true successors to THE ROLLING STONES and AEROSMITH.

The second thing is that "Chinese Democracy" doesn't sound like a unified album recorded by a unified band, because it isn't. It's a collection of songs laid down over a roughly 15-year period by a number of different players, recorded by different people. It's mind-boggling to think that on any given track here, the vocals, drums and guitars could have been recorded in different decades. As a result, while there are a number of strong tunes, none of them sound as fired up, as pissed off, as seductive as anything GUNS N' ROSES has previously recorded, with the possible exception of the title track, because these songs are most likely not organic creations but pieced-together puzzles.

Beyond that, the record is ballad- and orchestration-heavy, with a four-pack of softer tunes coming right in the middle of the whole thing and slowing it way down. The absolutely perfect production and lavish musical backdrops — keyboards, strings, horns — make this a lush listening experience but not a driving or intense one. By the time you gets to "Madagascar" you just wish someone would shoot the whole damn orchestra and bring the guitars back. And even some of the rockers, like "Riad N' The Bedouins" and the industrial-tinged "Shackler's Revenge", don't have the standout melodies to make them anything more than relentless but ultimately forgettable.

As mentioned earlier, there are flashes of greatness here. Axl sounds a little worse for wear but his voice is still essentially intact and capable of the gravity-defying howls and frightening growls that made him famous. When his melody making instincts work, they work well, as on the pop-tinged "Better". On the heavier side, "Scraped" and the ominous METALLICA-like power ballad "Sorry" have some monster riffs rumbling in the background. The playing — whoever is doing it (I did not have access to full album credits while writing this) — is always up to top-notch standards, while the production sounds as crisp as the early GN'R records.

But, again, this ain't GN'R. It's the work of one William Bailey, also known as W. Axl Rose, who set out with an idea and spent more time to perfect that vision than most bands even exist, while arguably sacrificing what made that vision special in the first place. Every artist knows that sooner or later, they have to let go of whatever they're creating — an album, a book, a sculpture — and send it into the world, warts and all. For Axl Rose, that time has come probably a good 10 years too late, and he's come up more than a little short.