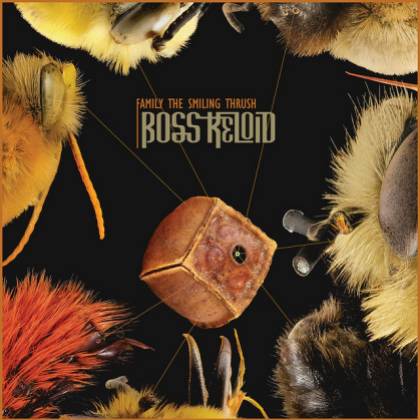 When music nerds talk about bands having "their own sound," what we are generally referring to are subtle deviations from otherwise familiar blueprints, rather than wholesale bolts from the musical blue. But while educated listeners will invariably be able to attribute certain elements in BOSS KELOID's sound to specific influences, the looming reality is that the British band have mutated into something truly and joyously original, and that "Family The Smiling Thrush" genuinely sounds like it has been beamed into our world from somewhere vastly more colorful and liberated. Somehow even outstripping the genre-squishing brilliance of 2018's "Melted On The Inch", the fifth BOSS KELOID album will deservedly be hailed in both metal and prog quarters, but this is one of those rare occasions when all tags and descriptions are rendered obsolete by mere proximity to the uproarious magic of the music itself.

If that all sounds like a lot of froth and hyperbole — and it is — then let these incredible songs do the talking. From the opening seconds of "Orang Of Noyn", "Family The Smiling Thrush" presents a musical world that rattles, crackles and glitches feverishly away in vivid sonic Technicolor, seemingly built to cope with the sheer weight of its countless brilliant ideas and, in turn, to whip them into something unprecedented and extraordinary, over and over again. BOSS KELOID have always been open to straightforward-ish riff worship, but since their 2010 debut album "Angular Beef Lesson", those riffs have blossomed into wonderfully angular and alien things, all essential to this band's internal musical logic, but quite unlike anything else that is happening under the grand SABBATH-ian umbrella. Throw in the Brits' thrillingly esoteric approach to arrangements, wherein bug-eyed wonkiness and soaring, life-affirming melodies intertwine, and every one of these seven tunes offers an irresistible embarrassment of riches. Frontman Alex Hurst's sonorous baritone and nimble enunciation have been a not-so-secret weapon for a long time, but even by previous standards, his singing on the likes of "Cecil Succulent" and "Gentle Clovis" is laudably authoritative and soulful: a powerful but humane focal point, amid the music's strident surrealism.

One of many dizzying peaks on an album of exceptional quality, "Hats The Mandrill" neatly encapsulates what makes this such an exciting and absorbing piece of work. Seven minutes of triumphant and emotionally electrified, post-everything doom-prog, it's a master class in perpetual motion, as BOSS KELOID sail majestically down a bubbling stream of giant, unwieldy riffs, hurling out gleaming melodic hooks at every opportunity and generally exuding an air of imperious abandon that, once again, sets them far apart from just about everything else.

Heavy music doesn't need to be original to be great, but it can be both. BOSS KELOID are the proof. If it's a modern classic you want, look no further.