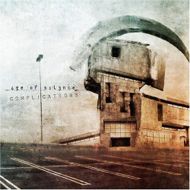 01. The Idea of Independence and The Reason Why It's Austere
02. Mr. M, Man of Muzak
03. Vouchers, Coupons, and the End of a Shopping Session

Picking up where last year's "Acceleration" left off, avant-garde supergroup AGE OF SILENCE release this three-song teaser, a sort of mini concept album about, and I'm not making this up, a shopping mall in Hell (not an entirely unfamiliar concept as we reach the season of holiday consumer frenzy!). With members of BORKNAGAR, ARCTURUS, MAYHEM, SOLEFALD and WINDS on board, it's a safe bet that the proceedings will be strange, if nothing else.

Lazare has a pleasant, lilting vocal style similar to Simen Hestnaes (BORKNAGAR/DIMMU BORGIR),sort of fitting the words to his linear, non-rhyming lyric wherever there's room. It's sort of a melodic ramble, for lack of a better word, and it has the bizarre effect of rendering these songs simultaneously charismatic and hookless. It's this, rather than the music (which, more so here than on "Acceleration", is rather straightforward and faceless, in service to the vocals),that gives AGE OF SILENCE its weird edge. Take, for example, the closest thing to a chorus in the second track: "Would the owner of a black Lamborghini Diablo, registration number double-F six thirteen, please contact the information point? You are blocking the exit." Imagine singing that with fist raised at a summer festival!

The lyrics make for a flat-out awesome read, though, even if they don't lend themselves well to a traditional verse/chorus/verse metal anthem. Fans of SOLEFALD, SIGH, ULVER, VOIVOD and other off-the-beaten-path progressive weirdness should be into AGE OF SILENCE. There's a bit of sameyness among these three tracks that keeps "Complications" from being a truly essential release — start with the excellent "Acceleration" debut instead, then pick this up to complete things.

Or, hell, buy this EP as a low-budget point of entry into AGE OF SILENCE's weird world — just avoid looking for it at a strange mall run by anyone named "Mr. M"…