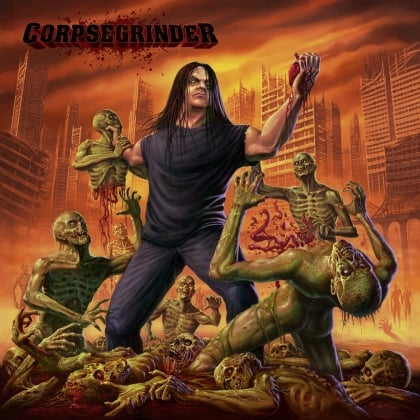 Assuming you have been awake at some point over the last 30 years, you will probably be familiar with George "Corpsegrinder" Fisher. Reassuring proof that the best people transcend the music they make, Corpsegrinder is rightly acknowledged as one of the greatest death metal vocalists of all time, but also as one of the metal world's good guys. You must, at all times, respect the neck. That much is obvious.

What was perhaps less obvious was the need for Fisher to make a solo album. Enter the increasingly influential Jamey Jasta, fresh from reviving Dee Snider's career and clearly in the mood for another worthwhile project. "CORPSEGRINDER" is the result, and while it almost goes without saying that this is a relentlessly savage death metal record, as opposed to some zany detour into EDM or country rock, what this savagely addictive 32-minute beat-'em-up hammers home hardest is the great man's irresistible charm. Frankly, who doesn't want to hear a Corpsegrinder solo album (apart from grumpy old Chris Barnes)? Exactly.

So here it is: ten muscular and murderous chunks of death metal purity, all sufficiently distinct from anything CANNIBAL CORPSE have done in recent times to justify the initial conceit, and all propelled breathlessly along by Fisher's unmistakable and unstoppable vocal delivery. As with Jasta's mentoring of Dee Snider, these songs are beautifully crafted things, custom designed to showcase the unerring power of that scabrous bark and produced in such a way that accommodates both old and new school death metal values.

Opener "Acid Vat" (featuring the tireless Erik Rutan) encapsulates the sheer, joyous thuggery on offer here: noticeably more straightforward than anything on CANNIBAL CORPSE's last few records, and violently catchy with it; it's the kind of fat-free, balls-to-the-wall death metal that breaks necks and wins new converts in similarly vast quantities. As ever, Fisher dominates the foreground with his effortlessly precise flow, but "Corpsegrinder" has the authentic feel of a real band effort, too. Again providing our titular hero with the perfect backdrop, "On Wings of Carnage" is a master class in grotesque grooves and morbid menace, with shades of IMMOLATION in the churning riffs. In contrast, "All Souls Get Torn" is an untamed blizzard of mid-'90s dissonance and jaw-breaking D-beats that really shouldn't be catchy, but which definitely is.

As reassuringly no-nonsense as the man behind it, "Corpsegrinder" is all about getting to the point and smashing it skyward. From the imperious, slam-tinged stomp of "Devourer of Souls" to the warped but snotty, two-minute assault of "Vaguely Human", Fisher eats these perfectly succinct and punishing songs up, slapping his humbly formidable persona over every last second and, as was arguably inevitable, giving metalheads yet another reason to salute a modern great with a heart of gold and a voice that will scythe your fucking head off.