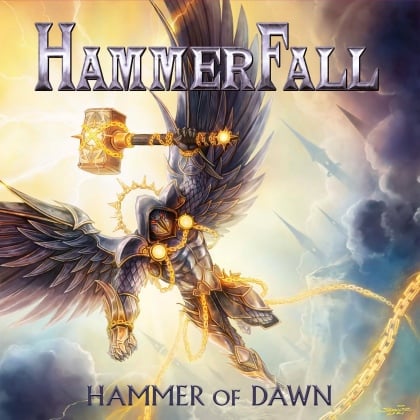 Swedish power metal powerhouse HAMMERFALL long ago mastered the art of mixing triumphant cries of brotherhood reigning supreme with the catchy hooks that are needed to prevent them from becoming an exercise in vainglorious overindulgence. It's a balancing act that has allowed the venerable Swedes to remain remarkably consistent since their 1997 debut release, "Glory to the Brave". The group's twelfth studio album, "Hammer of Dawn", is the work of a band that has generated another collection of inspiring power anthems while keeping their sound grounded just enough to avoid falling into the self-parody that has felled other bands that lost the plot within their own attempts at telling tales of teamwork, battle and victory.

In lesser hands, framing those lyrical tales of brotherhood within an incredibly earnest and on-the-nose opening track titled "Brotherhood" would surely inspire eye-rolling. In the hands of HAMMERFALL though, Joacim Cans's melodic vocal shouts to march onward are beautifully enveloped in an energetic and fast-paced, thrash-laden anthem punctuated by Pontus Nogren and Oscar Dronjak's wonderfully shredding guitars. It's the band's ability to time the usage of the tools at their disposal perfectly that allow every momentum swing and thus every track to serve as master's level courses in tightly wrapped packaging. The band knows exactly when to pull the reins on their chariots to navigate every turn cleanly, with nearly every track to follow on "Hammer of Dawn" also serving as prime examples.

"No Son of Odin" sees the band walking down paths oft-trodden by others — including HAMMERFALL themselves — but the crafting of the track allows for a maximum level of catchiness to keep the band's tale of motivational self-triumph to stay inspiring and fresh-sounding. The rousing power that drives the similarly spirited "Too Old to Die Young" and "Live Free or Die" gives well-worn tropes a fresh coat of paint. Even as orchestral keyboards and heavily layered shout-along choruses are piled on top of one other during the title track, "Hammer of Dawn", the crunchy rhythm riffs lurking underneath keep the core of the track from getting swallowed by the greater indulgences.

Elsewhere throughout the record, HAMMERFALL utilize the gift of a guest vocal appearance by KING DIAMOND to tastefully augment "Venerate Me"'s metallic rock. Chorale chants and rumbling bass lines foretell the transition of "Reveries"' opening moments from an understated ballad to a stirring piece of heavy metal glory. The power ballad does rear its head with "Not Today" serving as a respite from the band's otherwise frenetic onslaught. Moving forward the band marches on and delivers another hard-driving gallop with "State of the W.I.L.D." and a rousing finish with "No Mercy".

Is there any ground musically or lyrically contained on "Hammer of Dawn" that HAMMERFALL hasn't tread before? Not really, but when the formula has been perfected so well and is evident as such yet again, that's honestly the best answer possible to that question.