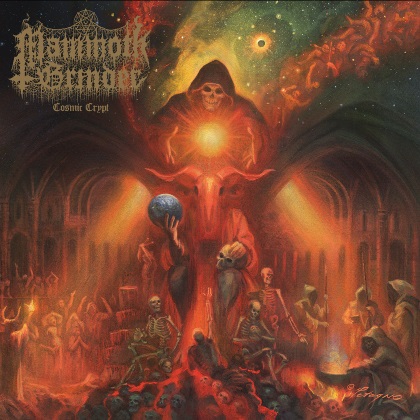 The ever-prolific Chris Ulsh is arguably best known as the drummer, and occasional guitarist, of en vogue thrashers POWER TRIP. However, the journeyman musician has peddled his wares of metal and punk via the blasting grind of HATRED SURGE, the snot-nosed filth of IMPALERS and with the Swedish death fanatics that makeup MAMMOTH GRINDER. The latter act went on hiatus in 2014 because of POWER TRIP's heavy touring schedule. But in 2017, Ulsh splashed a pot of hot coffee on the beast to effectively end the hibernation. And with the onset of the new year, MAMMOTH GRINDER has released its fourth-full length: "Cosmic Crypt".

Ulsh has injected new blood into the resurrected project from Richmond's IRON REAGAN, namely drummer Ryan Parrish, also a former longtime member of DARKEST HOUR, and guitarist Mark Bronzino. The latter played musical chairs with Ulsh who moved from six-strings over to bass guitar. The shameless worship of Swedish death metal that first emerged on "Extinction of Humanity" (2009) remains—the band was doling out dripping slabs of sludge-infused hardcore in its earliest days—but the obnoxious crackling guitar tone prevalent on previous album "Underworlds", though it still remains, has taken a backdrop in favor of more prominent low-end sounds and a slightly more streamlined and concise delivery. In other words, MAMMOTH GRINDER is coming into its own.

The stateside "Entombed-core" bands and subset scene, if you will, were burgeoning around the time of "Underworlds". Five years later, it's one of the most popular styles in the underground. Whether or not the group's like-minded label mates GATEKEEPER and GENOCIDE PACT, and numerous others, are riding the unit's coattails to any extent at all, it's clear that MAMMOTH GRINDER was integral in paving the way for the increasingly popular bridging of Swedish death metal darkness and brutality with hardcore's stomp and punch. The metal and punk blend isn't anything new. It's been around for decades. But the particular aspects of the aforementioned acts and increasingly ubiquitous style, most notably the classic buzzsaw guitar tone, binds them together within a niche that's distinct from other strands of death metal.

As with its previous material, "Cosmic Crypt" proves to be more interesting than a bulk of the purveyors of the style. But to reiterate, MAMMOTH GRINDER isn't simply running in circles. Thumping bass sounds are just as prominent as the tried and true rapid picking that stabs out of the thick smothering of fuzz. And Ulsh's vocals, too, are more burly and deep. Following the eerie keyboard introduction of opening number "Grimmenstein", the full-frontal assault never lets up, and the group doesn't beat around the bush. The hard rocking of "Blazing Burst" and the tempo-building swell of "Superior Firepower" stand out, but its approach remains consistent throughout the album. MAMMOTH GRINDER plays hard-hitting, simplistic gritty death metal led by the Ulsh's cavernous vocals. It's a double-edged sword. Generally speaking, "Cosmic Crypt" is an appealing, in-your-face album, yet in spite of the likable crunch and grimacing tremolo picking pleasures, it essentially runs together into an indistinguishable blur. And aside from "Superior Firepower" and "Rotting Robes", nothing truly stands out and urges you to come back for more. The basic hard-hitting drum beat propels the album with intent, yet it outstays its welcome and offers as much pleasure as you might expect from sinking your teeth into the sixth grilled cheese sandwich. Is "Cosmic Crypt" enjoyable? It has its moments. Is it essential? Far from it.