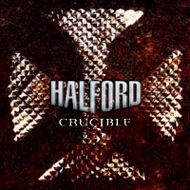 Unlike 2000's Resurrection, which was widely hailed as the album JUDAS PRIEST should have made after Painkiller, HALFORD's Crucible is a decidedly more diverse effort, featuring plenty of traditional metal moments while occasionally following a more experimental approach, thereby preventing this album from sounding like a carbon copy of its predecessor.

From the classic PRIEST-style sounds of "Betrayal" ("Exciter" for the year 2002) to the moodier, more psychedelic overtones of "Crystal", Crucible is a balls-out heavy metal album that makes no bones about capitalizing on frontman Rob Halford's considerable legacy without blatantly rehashing the singer's past efforts.

Ironically, it is Crucible's more immediate numbers, like the aforementioned "Betrayal" and the equally fast-paced "Handing Out Bullets", that pack the most punch and are almost certain to be embraced by Halford's rabid die-hard following, while its more adventurous numbers, like "Hearts Of Darkness", "Heretic", "Weaving Sorrow" and "Sun", rarely manage to rise above the generic territory, containing sub-par choruses and forgettable riffs, and ultimately bringing down the enjoyment level considerably.

Although virtually all of the cuts here are of at least passable quality, there is a surprising lack of top-notch material, with only the title track coming close to matching the raw intensity of the last album's most memorable moments. Even the production, handled, once again, but the usually very capable Roy Z (i.e. BRUCE DICKINSON, HELLOWEEN) seems to be pretty uneven, failing to capture the depth required by some of the more experimental tracks while complimenting the aggressive nature of the more classic-sounding compositions.

Despite its flaws, Crucible is a consistently more impressive album than JUDAS PRIEST's god-awful Demolition effort, and as such, it is certain to be hailed as a quality successor to HALFORD's debut. Far from a masterpiece, HALFORD's sophomore CD should at the very least keep the PRIEST purists happy until the inevitable reunion finally takes place—an event that is likely to happen sooner rather than later.