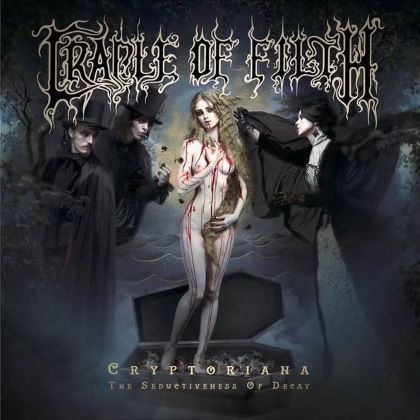 Cryptoriana - The Seductiveness of Decay

01. Exquisite Torment Awaits
02. Heartbreak and Seance
03. Achingly Beautiful
04. Wester Vespertine
05. The Seductiveness of Decay
06. Vengeful Spirit
07. You Will Know the Lion by His Claw
08. Death and the Maiden

"Nymphetamine", 2004, is the introduction album for many of CRADLE OF FILTH's followers, despite cutting groundbreaking works such as the band's loving ode to Hammer horror, "Dusk... and Her Embrace", the Clive Barker-inspired "Midian" and the sanguinary tribute piece to Countess Bathory, "Cruelty and the Beast". As accomplished as "Nymphetamine" is, could anyone have predicted Dani Filth and his blackened horde would reach beyond that?

"Hammer of the Witches", 2015, achieved that mark as the band raised its own bar and received mostly unanimous praise for a return to "Nymphetamine"'s astonishing grace amidst its scarring brutality. Building on the momentum of "Hammer of the Witches", Dani Filth directs another senses-pounding, mystic portal into a holocaustic hellhole with his customary forked tongue waggling against the world, just look past the goof on Sandro Boticelli's immortal "Birth of Venus" on the album's cover.

As ever, Dani Filth knows how to set a mood. In this case the opening overture's, measures are laid out from lavish to terrifying long before Dani rips his first screech. Choral work of the damned peals behind him, lifting the intensity level into a sorrowful segue to the otherwise blazing "Heartbreak and Seance". Even veteran CRADLE OF FILTH fans will marvel at the ease Dani and his thrashing pack bash amidst the orchestral and choral gusts around them. Dani yelps and shrieks amidst the weeping melody of "Heartbreak and Seance" as if doing it from an easy chair instead of a recording booth, which is not to say he's lax. It means he is in full command of the typhoon forces around him where he can allow the frenzied grandiosity to work its magic, dropping himself into the epicenter when ready to emit personal glee on top of his never-spent rage.

"Achingly Beautiful" can't exhaust itself from its copious chaos, sieving the speed then going all-out, clobbering its way to a morbid fugue sequence dotted with chimes, cello and harpsichord, before careening through a manifold of dizzying progressions. Uglier though no less stellar is "The Seductiveness of Decay", which replays a lot of CRADLE OF FILTH's standard death-grind modes, but the organs and harpsichords accelerate it to nearly the highest pedigree they can muster. The best is next to come. If only Bach and Hieronymus Bosch were alive to see their respective media come together under the demon's wing summoned by Dani Filth, Lindsay Schoolcraft and one of the most precise metal squads on the planet.

Beautiful is the despondent intro and reprised melody to the jaw-dropping "Wester Vespertine", achieving the uppermost level of artistry you'll hear set at gruesome hyperspeed, EMPEROR notwithstanding. The accomplishments in each breath-stealing movement within this track will astound you. Even for this band, the compositional majesty of "Wester Vespertine" renders the group's audience helpless as a soul-raking masterpiece.

Liv Kristine, LEAVES' EYES, lends her graceful textures on "Vengeful Spirit", while the 8:48 number, "Death and the Maiden" may not be the most spectacular epic CRADLE OF FILTH has executed, it's still stocked with magnificence and a slashing guitar solo. Frankly, everything following "Wester Vespertine" has an impossibly tough act to follow. The ensemble answers the call on the fast and ruthless "You Will Know the Lion by His Claw", continuing to speak of the group's excellence. At this point, CRADLE OF FILTH has very little getting in the band's way beyond compulsory repetition. Otherwise, "Cryptoriana - The Seductiveness of Decay" is more genius-level extreme metal set upon spectacle, which CRADLE OF FILTH weaves plenty of.