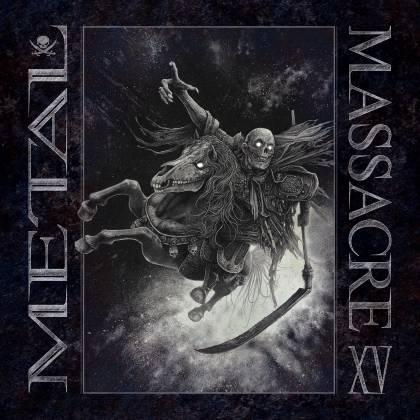 Now that a sizeable chunk of the metal-loving audience is enthusiastically buying vinyl again, the lost art of the compilation album may yet experience a resurgence. With their legendary "Metal Massacre" series, METAL BLADE contributed as much as anyone to ensuring that such things were fundamentally important to the '80s underground metal's evolution. For anyone who lived through that electrifying era, battered copies of various volumes of "Speed Kills" and "Metal Massacre" were almost as important as the classic studio albums released at the same time. Significantly, there is a long list of bands that clearly received their first authentic break via a compilation, with METAL BLADE's vinyl series kicking open doors for METALLICA, SLAYER, OVERKILL, TROUBLE, THE OBSESSED, METAL CHURCH, HELLHAMMER, VOIVOD, POSSESSED and countless others. In recent years, compilations have been rendered largely redundant by streaming services, playlists and insidious algorithms, but "Metal Massacre XV" raises a proud middle finger to the modern way of doing things. Instead, it's a timely and perfectly pitched throwback to the good old days, generously stocked with great heavy music from right here, right now. And in contrast with MUSIC FOR NATIONS' ill-judged recent attempt to revive the "Speed Kills" series, this feels firmly in the spirit of its raw, ragged and grubby forebears.

The best way to start any modern metal compilation is with a MIDNIGHT track, and "Masked and Deadly" fulfils that brief with a murderous glint in its eye. Nuts-to-the-wall, pitch-black rock 'n' roll of the highest order, it hammers home the timelessness of our beloved genre across three snotty and uncompromising minutes. In wild and stark contrast, Australian oddballs POISON RUÏN peddle a hazy and twisted strain of blackened post-punk, with surging dungeon synth atmospherics and an in-built sonic spikiness that owes more to RUDIMENTARY PENI and A FLUX OF PINK INDIANS than any metal band. Back on more familiar territory, the widely tipped FUMING MOUTH serve up a superior slab of pummeling, panzer-crush death metal that welds old-school muscularity to a very modern sense of maxed-out crustiness. First released on last year's excellent "The Strangest of Beasts" album, "The Trees Die Standing" showcases the icy grandeur of MANY SUFFER's epic but untamed black metal, albeit in a slightly truncated form.

Underground heads will already know the mighty TEMPLE OF VOID. Somewhere between the horrified melodrama of HOODED MENACE and something much more unpleasant, the band's oddly melancholic "Leave the Light Behind" is a real gem with a woozy and haunting undertow to cherish. At the other end of the atmospheric spectrum, RIPPED TO SHREDS are just plain fucking nasty: "Bone Ritual" is primitive but razor-sharp death metal, smashed out with real venom and buzzsaw guitar tones that threaten to draw real blood. Death metal nerds will recognize Californian brutes RUDE, whose 2017 album "Remnants…" was one of that year's gnarliest. Here they offer "Omega", a typically gruesome and slack-jawed slice of all-out war. After that MIDNIGHT DICE's old-school, melodic heroism comes as a welcome rush of iron-clad positivity, SMOULDER's ongoing mastery of US power metal and classic doom hits the spot with the expected ferocity, and Indiana miserabilists MOTHER OF GRAVES provide a fitting finale with five minutes of suppurating, deathly doom.

Of course, if you're not a vinyl fan, this may all seem enormously pointless. Your loss. "Metal Massacre XV" offers 50 minutes of top-notch underground metal with a pleasing natural flow and some slickly macabre artwork. What's not to like? Stream it anyway, you futuristic bastard.